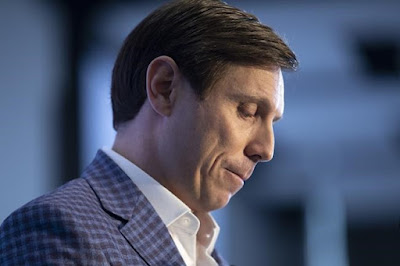 The Conservative Party has kicked Patrick Brown out of its leadership race. The Canadian Press reports that:

The campaign for Patrick Brown said it was consulting its legal team after the leadership election organizing committee of the federal Conservatives voted to disqualify him from the race late Tuesday.

Ian Brodie, the chair of the committee, announced the stunning move in a written statement after a meeting to discuss the matter.

He said the party had recently become aware of "serious allegations of wrongdoing" by the Brown campaign.

The allegations are related to the financing rules in the Canada Elections Act, Brodie said, but provided no further details.

In his statement late Tuesday night, Brodie said the chief returning officer for the party informed Brown of the concerns it received regarding the financing of his campaign, requesting a written response, and decided to withhold the interim membership list from his campaign.

Thus, one of Pierre Poilievre's main rivals has been dispatched:

Poilievre had not yet responded to the leadership election organizing committee's decision by late Tuesday night.

The campaign for former Quebec premier Jean Charest, who is also in the leadership contest, did respond by calling the news "deeply troubling."

"Transparency is paramount. We need to understand what the allegations are and how Patrick Brown's campaign responded."

Although he has been disqualified, his name is expected to still appear on the ranked ballot. A party spokesman said late Tuesday that a large batch of them had already been sent to members in the mail.

More proof that the Conservative Party shouldn't be allowed anywhere near the local dog catcher's office, let alone the Government of Canada.

Email ThisBlogThis!Share to TwitterShare to FacebookShare to Pinterest
Labels: Brown Is Out

It is too bad this is a blunt comment but blunt is where this is. By “hook or by crook”, the Cons at this juncture in their political lives, most of them, will do anything to get where they want to be. No doubt Poilievre is rubbing his hands and smiling all the way to the bank skipping along. However, the Canadian people wii not vote for the Cons all while they, the Cons, continue to try to swallow the pig whole. Anyong

Wow! The Cons are hanging party warhorse Fred DeLory out to twist on the wind. DeLorey, who served as O'Toole's national campaign manager for the 2021 federal election, is executive chairman of Patrick Brown's leadership campaign. Ultimately, he's responsible for the running of the campaign.

If I understand the Conservative Party's allegations correctly, they're saying that DeLorey oversaw a campaign that violated Canadian election spending laws, the same laws the party pled guilty to violating in 2012.

Looks like the party is cleaning house, getting rid of anyone associated with O'Toole's more moderate position and giving Poilievre a clear run at the leadership. Strange how both the Ontario PCs and the federal Cons torpedoed Patrick Brown.

They're a mean and nasty congregation, Anyong.

It's a repeat performance, Cap. And it tells you who these people are.

It is troubling that unproven and unexplained allegations are sufficient to remove a popular candidate from running for office; in fact, it "smells". Did the decision have anything to do with Brown's promise to shape a more modern party with greater appeal to the political middle? If so, to whom does the party intend to appeal?

With the field now cleared for Poilievre, Owen, it would seem that come the next election, Canadians will be facing some stark choices.

The Conservatives have failed to understand the first rule of Canadian politics, CD: To achieve government, you need to set up a big tent.

The Conservatives are no longer a political party, Lorne. They're a cult.

Now the reformatories are eating their own. Bon apetit!

Exactly, rumley. Have at it!