The Bill Has Come Due 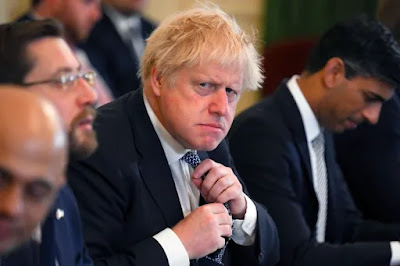 Boris Johnson has resigned. Jonathan Freedland writes that there is a symmetry to his rise and fall:

The lies that proved his undoing are now all too familiar. The last, fatal lie was his claim that he had not been told directly of complaints of sexual misconduct committed by the former deputy chief whip Chris Pincher, a claim rapidly exposed as false in a rare intervention from a former permanent secretary at the Foreign Office, Simon McDonald. It turned out that Johnson had indeed been briefed about Pincher, and that once again Johnson had not told the truth.

There comes a time, though, when the weight of the lies is just too much to bear:

It was the pattern of repeated mendacity that proved too much to bear both for Johnson’s previous chancellor and his hastily installed successor, his health secretary and a slew of more junior colleagues, a pattern so firmly established in the public mind that even his closest lieutenants could deny it no longer. Central to it, of course, is the scandal known as Partygate.

Johnson had stood before the country in one of the darkest hours of the postwar era and promised that we were all in this together, that the lockdown regulations that kept loved ones from each other, even as they drew their last breath, applied to everyone including him.

But, as the nation discovered nearly two years later, that was not true. He broke those rules, indeed he broke the law and “presided over a culture of casual law-breaking”, in the words of an earlier resigner, the former minister and one-time ally Jesse Norman, even in the very building where those laws were drawn up, seeing himself as “free of the network of obligation which binds everyone else”, to quote the Eton housemaster who had spotted that same trait in Johnson 40 years earlier. He lied again when he told parliament he was shocked and “sickened” to discover parties had taken place in Downing Street, when he knew all too well they had taken place because he attended those parties himself.

None of this was a surprise, because dishonesty has been the one constant through Johnson’s career. Famously, he was sacked from his first job, at the Times, for making up a quote, and later he was sacked from Michael Howard’s frontbench for lying to the then party leader about an affair.

Ordinarily, a reputation for serial deceit would close off the route to the top, or at least prove an impediment. Yet for Johnson it proved no obstacle at all. On the contrary, his route to No 10 was smoothed with lies. How come? What were the forces that propelled a man whose flaws were so clear and well documented into the most powerful job in the land?

The British Conservative Party bought into the lies:

Bored with a leader who was dutiful, diligent and deathly dull – whose wickedest youthful transgression had been running unauthorised through a field of wheat – Conservatives were ready for someone with some swash to his buckle.

That was bound to be Johnson. For more than two decades, ever since he had stolen the show on Have I Got News for You, Johnson had been the Tories’ guilty pleasure. They would mob him at party conference, giggling at his every scripted gag, delighting in every studied ruffling of the hair.

For years, the conventional wisdom had held that “Boris” was the obvious choice for jester but an improbable king. But after May, under whom the Tories won just 9% of the vote in the 2019 elections for the European parliament, they were ready to overlook all the obvious flaws and offer the throne to her polar opposite.

The political logic was straightforward. For all his defects, Johnson was hailed as the Heineken candidate, able to woo parts of the electorate other Conservatives could not reach. Had he not proved that in London, becoming mayor – twice – of an otherwise Labour city? Conservative MPs, even those who knew Johnson best and therefore disliked him most, elected him leader on that basis.

But political success comes with a price. And now the bill has come due.

While Britain and the US have finally rid themselves of lying leaders who encouraged casual cheating and lawbreaking, the profound harm they caused their countries lives on.

Meanwhile, our own Conservative Party is clearing the decks to choose one for themselves, and when things go south, as they inevitably will, they'll bleat, "how could we have known?" As author Maya Angelou noted, "When someone shows you who they are, believe them the first time."

They all knew Johnson was deceitful and they all patted him on the back, loved his deceitful jokes and made him Prime Minister. Hhmm! Anyong

Exactly, Cap. The history of these men is well established. We should know what we're getting.

Which is to say they were fools, Anyong.

The British Conservatives have ejected Mr. Johnson, CD. The American Republicans have doubled down on Trump's lies. That's a pretty remarkable difference. It suggests that the British have a line that can't be crossed.

I think the difference is more circumstantial than cultural. British Tory MPs were fine with BoJo's antics until they lost two by-elections in seats they'd held for a century. That does tend to focus the mind when the scandals are multiplying like rabbits.

In contrast, few US congressional seats are actually in play. Most GOP congress critters are at no risk of being voted out and so they double down on the crazy. The GOP would have cut Trump loose long ago if backing him meant risking their jobs and perks.

Perhaps the difference comes down to the voters, Cap. Perhaps British voters have a line that can't be crossed.

" British voters have a line that can't be crossed." We wish!

while our wish is technically true, crossing 'the line' is all about staying inside the Overton window - especially with respect to the left side.

Like USA & CDN voters, the media makes sure the trained seal's votes are secure.

It does seem, though, that the British have a better way to dispose of a baffoon, PoV.