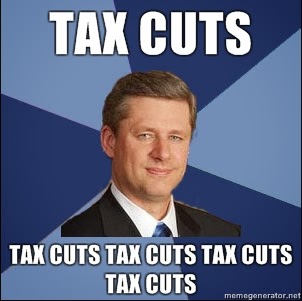 Eugene Lang writes that, if you want to know what Stephen Harper has "accomplished," all you need do is tally up his tax cuts:


Over the past eight years, most major categories of federal taxes have been cut deeply — from personal income taxes, to corporate income taxes, to the GST — so much so that Canada now has the second lowest business and consumption taxes in the G7. In addition, a litany of tax credits have been put in place, notably the Children’s Fitness Tax Credit, the Public Transit Credit, The Home Renovation Tax Credit and The Tax Credit for first time home buyers. And added to the list is income splitting for seniors — another major tax cut — which the government has committed to extend to families once the deficit is eliminated.


As you might expect, a tax jihad of this magnitude, like all wars, drains the treasury. One credible estimate pegs the total value of these tax cuts to be on the order of $45 billion annually in foregone revenue. To put that figure into context, it’s about one third more than the annual cost of Old Age Security, the biggest and most expensive federal social program, and about two and a half times the size of the federal deficit.


There are consequences to draining the national treasury:

Federal revenue has been reduced to its lowest level relative to the economy in two generations. As a result, Ottawa’s capacity to author significant new programs — to deal with issues like income inequality, rising health-care and post-secondary education costs, and an aging population — is neutered, especially when no political party is willing to make the case for substantially increased revenue and all are committed to balanced budgets.


Harper has delivered on the central Conservative dogma -- taxes are evil. But what is even more disturbing is that the two main opposition parties have also bought into the anti-tax mania. Tax cutting began under Jean Chretien and Paul Martin. Now the NDP also touts the doctrine of minimum taxation:

The NDP argues for incremental revenue restoration through tweaks to corporate income tax rates and possible increased taxes on the highest income earners, both of which are largely symbolic and will do little to unwind the fiscal structure the Conservatives have put in place.


In other words, the three major parties have all had a hand in crippling government.

Inculcating an aversion to tax increases for any reason seems to be the Harper cabal's greatest triumph, Owen, one that the article points out will not be countered by either Trudeau or Mulcair. But I can't help but think that with the right justifications, leadership and safeguards, many, many Canadians would respond positively to a return to progressive taxation.

Unfortunately, I have no idea where that leadership could come from.

I agree, Lorne. Canadians understand that medicare depends on taxes. They treasure medicare -- whatever its flaws.

There is more support for taxes among Canadians than there is among their leaders.

What better way to sap social cohesiveness than to defund government? Taking my cue from Bacevich I'm coming to think it's us, the country, versus them, the state. I don't think it matters much what label you slap on it - Conservative, Liberal or New Democrat - they're all corporatist and they're all petro-pols.

Sure Harper's the worst of this sorry lot but not by much. I've been writing for years that our anti-Harper crusade was an unhealthy distraction that prevented us from focusing on what we can and desperately need to change, our own political parties.

As long as our political parties have to go -- cap in hand -- to the monied class, they are going to serve the interests of the wealthy, Mound.

Getting rid of public financing for elections -- meager as it was -- was one of the first things on Harper's agenda. His line was we couldn't afford it.

He knows that, if the people control the purse strings, he's yesterday's man.

yes, it is always entertaining to hear about deficients when we know they came about by cutting taxes. people can complain about all the program cuts, the poverty, the lack of services to veterans, the lack of housing in the north, lack of you name it, we have a lack of it, except a lack of tax cuts. it costs money to live in a civilized society. At this rate we will begin to look like some third world countries which don't collect taxes. they also don't pay their teachers. Oh, how happy we all will be.

It's sad, isn't it, e.a.f? For these folks, third world nations have become their economic icons.