Mr. Harper And The Pope 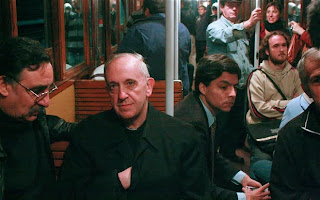 Conservatives are not happy with Pope Francis. He has attacked their rosetta stone. And he's pulling no punches:

“The danger in today’s world," he says, "pervaded as it is by consumerism, is the desolation and anguish born of a complacent yet covetous heart, the feverish pursuit of frivolous pleasures, and a blunted conscience.”


More than a few conservatives have criticized the Pope for being economically naive. Perhaps that’s a cue for us to ask some embarrassing questions about the moral and spiritual sophistication of the works of the Chicago School.

The problem with free market ideas has never been that they don’t describe the economy. It is that they are like oregano in a garden — growing like topsy, crowding out other ideas and sometimes smothering them. They invade our moral and political reasoning and replace it with the mechanical logic of homo economicus.


And there is no more vigorous  -- and narrow -- a spokesman for homo economicus than Stephen Harper. Harper sees everything through an economics lens. His world is pinched, lean and mean. And it is precisely that world which the Pope rejects.

Email ThisBlogThis!Share to TwitterShare to FacebookShare to Pinterest
Labels: Harper and Pope Francis

A long-lapsed Catholic, I am really heartened by the pronouncements thus far from Pope Francis, Owen. I hope that he puts into Church practice what he is preaching.

On a related note, Rick Salutin in this morning's Star has some interesting things to say about the bona fides of those 'master economists' Messieurs Harper and Hudak.

I, too, hope Francis gains an audience, Lorne. He strikes me as a Pope who is quite different than the Popes the nuns taught me to admire.

As for Mr. Harper and Mr. Hudak, they are merely Fuller Brush salesman, trying to drum obsolete merchandise.

Well, why would Harper care about what the pope said when his new best international friends are of the Zion - Star of David Cult and don't care either?

This Zion cult are two-faced like Harper, they do everything they denounce when it happened to them years back apartheid/pogroms/mass murder. Only they do it to Palestinians, Lebanese, Syrians whom like the Nazis before them claim that these other semitic peoples are not worthy of life nor real intelligent human people?

So its one semitic (that believes it is special) race against all other semitic races:

Sem-ite; 1. A member of a group of Semitic-speaking peoples of the Near East and northern Africa, including the Arabs, Arameans, Babylonians, Carthaginians, Ethiopians, Hebrews, and Phoenicians.


Now we can't talk about what happened to them then, because they own it and are the victims and we shouldn't conflagrate their collective cultural pain by reminding them that they are not the only culture in the world to have suffered in such a heinous grievous manner. But we are to be forever held hostage and bribed emotionally .

A young Palestinian child with no options in life living in a 'cage' called the West Bank sees an Israeli soldier across the fence, so he picks up a stone and throws it at the soldier. He then turns and runs through a small ditch across a small road and ducks into a housing complex.

A press release in Israel notes a brilliant victory over an illegal combatant (reality: the child) and a Hamas lair (reality: a family housing complex).

But then again I don't know if I'd throw my trust behind the pope yet after all he lives in one of the most "lavish palace/castle/fortresses of the world." A little materialistic for a guy who's supposed to be humble would you not say? He has more rooms and servants than the Queen-E another useless figurehead. I believe pope Francis is also wealthier than the monarch of England.

Historically, there is enough inconsistency to go around, Mogs. But this Pope may turn out to be someone who practices what he preaches.