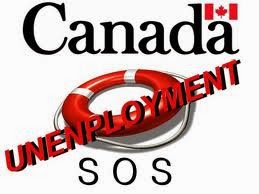 Jim Flaherty vows that the budget will be balanced by the next election. But at what cost? Daniel Tencer, of The Huffington Post, writes:

Job creation in Canada this year has been the weakest in a non-recession year in more than a decade, and the low quality of the jobs being created is causing some economists to raise concerns about the country's economy.


It's not just about a paucity of jobs. It's about the kind of jobs that are being created:

Even the latest numbers for November look negative when digging into the details. While the jobless rate held steady at 6.9 per cent and Canada registered 22,000 new jobs during the month, 20,000 of those were part-time, notes Erin Weir, an economist for the United Steelworkers.


Mr. Flaherty pitches this as progress. But he is not a policy genius. When he was running for the leadership of the (misnamed) Ontario Progressive Conservative Party, he suggested that the way to cure homelessness was to sweep the homeless off the street and throw them in jail.

It is no wonder that Mr. Flaherty is balancing the budget on the backs of the unemployed.  Like his proposed solution to homelessness, it is cruel and unusual punishment.

When they are bring over Chinese and training them to work the oil patch and the BC mines? Those jobs are not for Canadians. They are also bringing over Chinese Engineers. I believe they have already placed 20 of them.

All of our Canadian resources, Harper hands to Communist China? They take the resource jobs too.

The Chinese send their wages back to China. That money doesn't even get spent in Canada.

Mr. Harper is doing Canadians no favours, Anon. They are the ones footing the bill, not making the money.

The Harper government is most definitively at war with First Nations, the homeless, the disabled, the environmentally aware, the unemployed, disabled veterans, the old, basically any person who has been weakened somehow by the right wing fascist dictatorship Herr Harper has imposed on Canada. Also if you disagree with him and his policies you have become an enemy of the 'Harper-state' and are at greater risk to having your freedoms curtailed.

"The Snowden Leaks and the Public" published in The New York Review November 21, 2013 edition by Alan Rusbridger, who is the editor of The Guardian, a British avant garde newspaper, is a good read to wrap your mind, as an average citizen, about the importance of Edward Snowden's revelations.

Basically the USA, principle, the UK, vice-principle with Canada, Australia and New Zealand forming the rear guard (known as the five eyes or FVEY -

- have endeavoured to cast a net of surveillance on every person on the planet. This is dangerous stuff as Edward Snowden himself who used to be one of the 'meta data miners" points out that the information which is being gathered can be used and manipulated to make even the most innocent person guilty of terrorism, as terrorism is an open unwritten book to mean anything the posse, in our case the harper government determines.

As in the way the Harper government redefined people who are concerned about the environment as eco-terrorists, and worse yet anti-economic growth - economic terrorists -this being the largest sin in Harpers cruel and pitiful world. Also that means I and countless others have then been labeled because we do care about the Earth and believe that big business needs to be reigned in and take a back seat to environmental concerns.

What I just stated clearly makes me a heretic in the eyes of the Harper government. The New Prisons are for people like me and will be labeled Herr Harper's Stalag I, II, III and etc.

"As one of Canada’s security and intelligence agencies, we analyze mountains of data – searching for key pieces of the most complex and technologically advanced puzzles in order to protect and secure one thing: information." -from -continued..

- supposedly can't spy on Canadians. NSA can't spy on Americans GCHQ can't spy on their British citizens etc with the rest of the five eyes. Now you understand that through this FVEY agreement CSEC does the spying for the Americans British and Kiwis and Aussies where their legislation forbids them to do it themselves and vice a versa CSEC relies on NSA GCHQ and etc to spy on us and then in an information swap attain what they are not legally entitled to, information on its own citizens. A nice cozy relationship eh?

One of the glaring problems is that out of this close knit spying community of approximately one-million people who know all this information gathering net can make vast fortunes by what they eavesdrop on. For instance nobody has ever explained the vast and fortuitous fortunes that were made on 911.

"There was very high trading in "put options" on American Airline and United Airlines, immediately before 9/11. These were effectively gambles that their share prices would fall, which of course is what happened once the attacks took place. This shows the traders must have had advance knowledge of 9/11." read here -

Now we know thanks to Edward Snowden that probably close to one million people had access or forewarning of the most dramatic event in human history since the assassination of JFK and stood to profit handsomely.

The Harper government has gone off the deep end and lost all touch with reality and these are dangerous times. The Harper government has abrogated its duties to it's citizens and slavishly worships corporate greed which put it in power. Harper needs to be removed as he is the most substantial terrorist threat to Canada, Canadians and Canadian freedom.

Essentially, Mogs, Harper and his supporters suffer from rampant paranoia. They know the majority of Canadians don't share their views.

From their perpective, the majority of Canadians are the enemy.

Sadly so Owen and worse it is pretty telling when one runs this google search "psychological evaluation of Stephen Harper" what one finds there. Canadians are very healthy skeptics of this man who has no real history or background except for very far right leaning organizations who had admitted Nazis in their (his) organization.

He is a most peculiar person and has been known to have temper-tantrums in Ottawa as well as in capitals of foreign nations. He never grew up, so there you have it a petit tyrant boy-man in a position meant for preferably sane mature adults.

Who are these Harper worshippers? They are the traitors amongst us.

Well, there may be some good news, Mogs. I read today that -- according to the latest Nanos poll -- Harper is losing support on the prairies and in Ontario:

That is good news indeed now if his popularity wanes elsewhere in Canada as well he's done like dinner cooked like chicken.

"National Post: Stephen Harper “read and mastered” the biography and leadership style of Russia’s Communist dictator Josef Stalin, and said the prime minister had adopted some of the same tactics. -Anonymous Senior conservative."

The more you dig the more curious and alarming this man Harper becomes. He has it seems a fetish for his own photographs it seems....

The parts about his photo fetish are revealing indeed even the Queen's photo gets an imprint of Harper in the background, how nuts is this?

"Others, including Preston Manning, have written how he was quick to draw away from situations where he was not in control."

from a Lawrence Martin article in The Globe and Mail

Andrew Coyne said after the Conservative convention, Mogs, that the party looked more like a cult than a party.

The photo business adds to that analysis.

Which is to say that Flaherty really isn't the finance minister at all. That position is held by Stephen Harper.