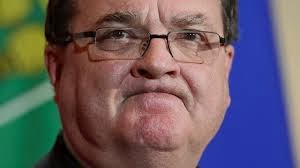 As finance ministers meet today, Jim Flaherty argues that our fragile economy can't afford enhancing the Canada Pension Plan. It's the latest version of an old argument -- the very argument that got us into our mess in the first place. Paul Krugman writes that Flaherty's world view is at the heart of the problem, Focusing on the United States, he writes:

Start with the numbers. On average, Americans remain a lot poorer today than they were before the economic crisis. For the bottom 90 percent of families, this impoverishment reflects both a shrinking economic pie and a declining share of that pie. Which mattered more? The answer, amazingly, is that they’re more or less comparable — that is, inequality is rising so fast that over the past six years it has been as big a drag on ordinary American incomes as poor economic performance, even though those years include the worst economic slump since the 1930s.

But the prime minister and Mr. Flaherty pay little attention to numbers. Their budget documents are remarkably free of them. They speak for the conventional wisdom  -- both before and after the Great Recession:


What do the pre- and postcrisis consensuses have in common? Both were economically destructive: Deregulation helped make the crisis possible, and the premature turn to fiscal austerity has done more than anything else to hobble recovery. Both consensuses, however, corresponded to the interests and prejudices of an economic elite whose political influence had surged along with its wealth.

This is especially clear if we try to understand why Washington, in the midst of a continuing jobs crisis, somehow became obsessed with the supposed need for cuts in Social Security and Medicare. This obsession never made economic sense: In a depressed economy with record low interest rates, the government should be spending more, not less, and an era of mass unemployment is no time to be focusing on potential fiscal problems decades in the future. Nor did the attack on these programs reflect public demands.

In the United States, the boogeyman is public healthcare. In Canada it's public pensions. But the same people are leading the charge. And they're the same people who got us here in the first place.

Email ThisBlogThis!Share to TwitterShare to FacebookShare to Pinterest
Labels: Pensions And The Harperites

Judging by Canadians' passivity in the face of the cuts to postal service and Flaherty's opposition to pension plan enhancements, Owen, the ideological right seems to be winning the battle here. In many ways, we are are own worst enemies.

Unfortunately, they are, Lorne. We are our own worst enemies.

Here is the real bogyman the governments policy to enrich the lives of bankers, (they steal from us to do it), through unnecessary interest:

Borrowing from Bank of Canada would make governments debt-free

Through the publicly-owned Bank of Canada, which was established in 1935, the federal government can borrow money, essentially interest-free, and make such funds available not only for its own use, but also for provincial and municipal governments. Such borrowing helped Canada get out of the Great Depression, and to finance our participation in World War II. Continuation of this practice until the early 1970s played a key role in creating Canada’s post-war prosperity, as well as launching Medicare and other national social programs.

For the past four decades, however, our governments at all levels have increasingly been borrowing instead from the private banks, and paying steep interest on those mounting debts. Each year, governments across Canada now pay some $60 billion in interest on their debts – interest payments that need not be incurred.

This enormous debt burden deprives our governments of revenue that could be used for much-needed improvements to social and economic services – and also to help civil society groups that work for the public welfare. Such organizations depend largely on government funding, but are repeatedly told there is never enough money available...."

This was in 2011 and the governments in Canada were stealing $60 BILLION a year from Canadians and the Canadian economy. $Money that could be spent on brining people out of poverty and substantial social and economic programs and development. But no the government since 1974 has been borrowing from private banks under the guise of saving us from inflation. In reality it was a major coup on the part of the 1%-ers, a rip-off tax and fee on all Canadians. This amounts to ~$2000.00 per person man women and child. But remember the workforce are the ones who have to pay this debt so it really works out to much per average full-time worker. These include any worker over 15 and all part-time workers. So the burden for the average Canadian worker is much higher ~$3000.00 to ~$5000.00 per worker, or more, just to pay the interest on government debt.

Figures on employment from here:

We need to make this an election platform for every level of government and demand laws forbidding government to borrow from these private banks who are literally leeches on our economy. This blatant theft gives brainless economic wonder boys like Harper an excuse to move money from where it belongs in our social systems and placing it into the hands of the bankers legalized theft is what it is. Is this what we want as Canadians, to bankroll the banks? And further pay for their mistakes as well? Wake up Canada, before it is too late.

The Harper government in-order to service this debt is cutting and slashing everything insight, with a chainsaw massacre mentality and telling us we will have to tighten our belts. Why not borrow the money we owe right now from the Bank of Canada and pay off the private banks eliminating the $60,000,000,000.00, or what ever it is today, per year in interest payments??? This is really the proof that the harper neo-cons want to enslave us with debt.

That's interesting, Mogs. It's undeniable that the Harper government is working for those who control private capital, not public investment.