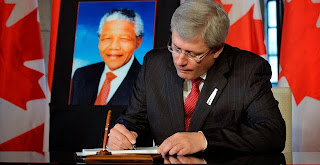 There was something a little hollow about Stephen Harper's praise for Nelson Mandela. Murray Dobbin writes:

In 1989 Harper was a member of the Northern Foundation (NF) about the same time that he became policy chief of the Reform Party. The exclusive mandate of the NF was to counter the serious efforts of the Canadian government of Brian Mulroney to pressure the South African government to release Nelson Mandela from prison and to end apartheid.


Certainly, when it comes to the matter of justice, the two men live on different planets. Steve Sullivan delineates their differences:

But what if Nelson Mandela, a man who promoted peace and dialogue and forgiveness, was an opposition leader in Canada? Those are all qualities that Stephen Harper’s Conservatives would attack. Mandela would be portrayed as soft on crime. He would be damned as someone who cares more about child rapists than children and he would be held up as an advocate for criminals.

Mandela had a vision about how to address harm and conflict. Stephen Harper has slogans. Mandela embraced dialogue; Harper vilifies anyone who disagrees with him. Mandela lived forgiveness; Harper knows only how to attack.


Yet there Harper was two weeks ago, singing Mandela's praises. The praise was well deserved. And coming from Brian Mulroney it rang true. But from Harper? Consider some of the founding fathers of the Reform Party. Murray Dobbin pulls no punches:

As I documented in my book Preston Manning and the Reform Party, the Reform Party's connection to, and harbouring of, pro-apartheid activists went right to the top. William Gairdner (a right-wing public speaker and immigration critic) was one of the party's favourite key note speakers and regularly attacked Canada's policy on South Africa and leveling attacks on the "One party dictatorships of Black African countries."

Stan Waters, the Reform Party "senator" (he won an election for senator in Alberta) was the party's foreign affairs spokesman. He was openly supportive of white rule in South Africa: "South Africa should think twice before allowing majority rule because most black African countries live under tyranny."


Sullivan captures the differences between the two men in one simple sentence: "Mandela forgave his jailers. Harper is building more prison cells — and doing his best to fill them."

Email ThisBlogThis!Share to TwitterShare to FacebookShare to Pinterest
Labels: Harper and Mandela

Likewise Allison Redford. I can only wonder what her role might have been in the work she did in SA.

If only there was a benevolent God, Harper would be squashed like a bug.

It's interesting to hear people on the right, who called Mandela a communist and a terrorist, now wax poetical about his nobility, Danneau.

Who knows, Mound? Perhaps Zeus is taking aim even now.

During Harper's public signing of the book of condolences, I had to turn away. Likewise, I paid no attention to anything he had to say about Mandela. Harper has zero credibility for those who truly honour Mandela's memory, Owen.

You would think that Harper's history would cause him embarrassment, Lorne.

Harper is a stage/staged fool kind of like the joker in the English courts of years of yester-yore, they were meant as a distraction from what is really going on. The sooner we can relegate Steve to his place as a misguided mislead pompous-joker (pompous, which literally means self important) useless loser, (they like to call us useless eaters) the sooner we can strive to move ahead as a species that has the ability to shepherd this planet back to the garden of eden!

Based on a recent interview, Mogs, it appears that he has no intention of leaving.

There is a long road ahead.

Peter MacKay represents the dull material we find in our current group of political incompetants.. the group intellect and runny ethics are stunning when examined collectively and objectively. Imagine James Moore or Vic Toews in the judiciary.. or Peter MacKay. Kellie Leitch .. Joe Oliver? Would anybody want these people or the exalted inner ring, Soudas, Byrne, Novak, Poilievre as teachers of children ? Not ...

The people Harper attracts to both his inner and his outer circle tell you a great deal about the man, salamander.

No independent thinkers there.