Not A Banner Year 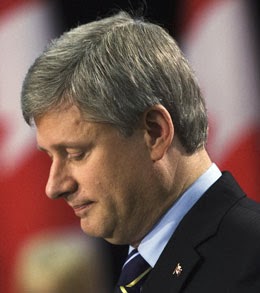 This has not been a good year for Stephen Harper. It began with Harper unleashing the Deloitte audit dogs on Chief Theresa Spence. And it ended with his attempt to call them off Mike Duffy. Between the Deloitte bookends, it was one debacle after another. Michael Harris writes:

The PM had come across for First Nations all right. He apologized and promised “change”, but he delivered the paternalistic status quo — and budget cuts to bands from coast to coast. He did his best to destroy Chief Spence in a very public humiliation. He left the reputation of National Chief Sean Atleo in tatters.

Of greater tactical significance, he divided the Assembly of First Nations. Tellingly, Harper’s approval ratings rose as a result of beating up on the poorest demographic in Canada — a sign of where this PM has led Canadian public opinion.


Then, having put the screws to Canada's native peoples, the news of administrative screw ups fell like freezing rain on an already snow covered road:

It came to light that Human Resources minister Diane Finley had somehow lost the computer records of 538,000 young student loan holders, including their contact information. Despite the apologies, it was disquieting.

A court decision in 2013 found that there had indeed been fraud in the 2011 election that gave Harper his majority. Fraudsters directed voters to the wrong polls using a list the judge in that case said was identical to the one in the Conservative party database. Based on previous Conservative electoral dirty pool, including the in-and-out scandal, it wasn’t strange that people were concerned about Finley’s data loss.

A huge list of what was potentially the most important voter demographic in the next federal election had somehow walked out the door of Finley’s Human Resources department. Whatever was behind the mystery, it was hardly an endorsement of Conservative management skills and it might be a sign of something far darker.


But there was more than missing names:

As ironic as that was, greater ironies lay ahead. In his report to Parliament in 2013, Auditor-General Michael Ferguson reported that he could not find $3.1 billion from the Public Security and Anti-Terror initiative. The reply from the Harper government came from Treasury Board President Tony Clement: It was okay because no one was saying the money had been misspent. Coming from Gazebo Tony, that was a very great comfort indeed.


And, of course, there was the Senate scandal, which refuses to die. This was the year that Canadians learned for certain that Stephen Harper has no eye for talent and no talent for administration.

It was not a banner year.

Let us all display that banner of Harper failure conspicuously and regularly until the next election, Owen.

You can bet, Lorne, that the Harper propaganda machine will be pointing fingers at lots of people.

But, in the end, we need to remember that the chickens have come home to roost.

Just a slight comment here; your label at the bottom of this article "Labels: Harper's Horrible Year" should have included as a label "Canada's worst nightmare; the Harper years"

Harper's triumph was that he was the best damned liar and cheater on the block, how as Canadians can we be proud of the fact that we have an illegitimate PM in power?

We cannot; and therefore further more fire and brimstone goes to the voters that stand behind this devil Mr. Stephen Harper himself. I am freely allowed to label him (the PM) that way because he has in the most exemplary way betrayed all Canadians except the Petro Patch who have gained staggering inroads to defeat democracy for their blind race to achieve the almighty loonie.

What once was stated and still rings true today;

"Canada, the most affluent of countries, operates on a depletion economy which leaves destruction in its wake. Your people are driven by a terrible sense of deficiency. When the last tree is cut, the last fish is caught, and the last river is polluted; when to breathe the air is sickening, you will realize, too late, that wealth is not in bank accounts and that you can’t eat money. " -from

How Harper is fulfilling this desperate race to the bottom and destruction is clear; funded by the petro patch who so fondly decorate their xhristmas tree with all the things you can't eat but petro dollars will buy.

I suppose this link in your column was a chide?

"had indeed been fraud"

-because when I use the link it goes to the lottery results of May 24, 2013 and Mayor Rob Ford's denial of substance abuse. Interesting read though, what the ford mobster said then vs. what he has admitted to lately.

We out west get regular ribbings from you eastern folks but hey we did not spawn Harper he is from Ontariario so is Rob Ford!

Is that the best you eastern blokes have to offer? (tongue in cheek)

I apologize, Anon. The link was taken from the original article. Obviously -- somewhere -- the wires got crossed.