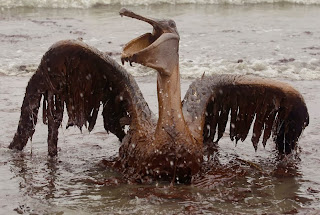 The irony is of epic proportions. The Jewish National Fund plans to put Stephen Harper's name on  a bird sanctuary. It shall be called The Stephen J. Harper Hula Valley Bird Sanctuary Visitor and Education Centre. Michael Harris writes that naming a bird sanctuary after Stephen Harper is like naming a kids' summer camp after Rob Ford. Consider what is happening in Northern Alberta:

Bloomberg Businessweek [reports] that by 2020 wastewater from the Canadian tar sands will cover 62,000 acres of Northern Alberta and possibly spread through the boreal forest ecosystem.

Big players like Syncrude are planning what are being described as “end-pit lakes”, thirty of them in total. If they are allowed to go ahead with their plans, Canada will have a new lake district.

The district will be full of what the oil industry calls "replica lakes:"

A replica lake starts as a dump of toxic slurry covered by freshwater to a depth of sixteen feet — the amount of water allegedly required to keep the bad stuff on the bottom.

Eventually, these poison lakes will “replicate” living lakes, complete with fish, frogs and mosquitoes. The exact number and location of eyes, fins and legs remains unknown. But life will return, or so Syncrude scientists say. Turns out there are naturally occurring microbes in that sludge that suck the poison right out of those pollutants. That’s right, the poison lakes will heal themselves.

Canada’s greatest living freshwater scientist, David Schindler, isn’t so sure. He told Bloomberg, “Nothing is going to grow in that soup of toxic elements except perhaps a few hydrosulfide bacteria.  All of the unforeseen consequences are being downplayed.” And, so, in Israel, at least, Stephen Harper is feted as a friend of the environment.

The Harper Bird Sanctuary or Harper BS for short!?

The shorter version just may catch on, Rural.

"The Stephen J. Harper Hula Valley Bird Sanctuary Visitor and Education Centre"? This is weird. Steve is weird. Everything he touches and everything that touches him becomes weird. It's all just plain weird.

It's all part of Mr. Harper's Theatre of the Absurd, Anon.

He is, to put it simply, a disgusting human being.

And some people were willing to pay big money to hear him sing, astone.

Another way to look at it, PM Shit Head's Bull Shit. One could only hope we can take the bull out of the PMO and send his life to the abattoir known as jail.

One can only hope it gets trashed by an "Act of God" that they don't see coming. May the almighty pantheon of the world see the dishonourable PM sent to serve in Hell, or at least serve as a little snack for Ammit.

Unfortunately, bahamut, he has not yet been held accountable. But, then, the show isn't over yet.

Harper may be a friend to Israel, Owen, but he is clearly an enemy to the environment.

He may be a friend of Israel, Lorne. But he's no friend to his own country or to the planet.