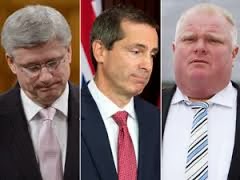 The conventional wisdom is that the price of political scandal can be measured in money and reputation. But Robin Sears -- an  old hand at getting out the vote -- writes that the real cost of scandal is deadly:

There is an even higher price.

The damage that these scandals do to public trust. Not since the dawn of universal suffrage in the established democracies have voters been more angry at their governors. Nor have so many citizens in so many countries acted on the bumper sticker exhortation: “Don’t Vote! It Only Encourages Them!”


In fact, a cynic might conclude that it could be to a party's advantage to manufacture a scandal:

It is easier to steal an election where four out of five citizens stay home — it costs less and requires little organization. Years of research in all the old democracies demonstrate that those who consistently turn out in times of declining participation are the angry, the haters, the zealots, the “wacko birds” in John McCain’s delightful parlance, Ford Nation in ours.

Before you descend to that level of voter defection, it is the young, the newcomer, the poor and the disconnected that stay home. It is surely not partisan to observe that a community governed by leaders chosen by the old, the rich and the angry is not likely to treasure our values of tolerance and inclusion as priorities.


Trust is the coin of the realm. Destroy it, and you bring the kingdom down:

Francis Fukuyama’s majestic study of successful societies, called simply “Trust,” offers powerful proofs of the price paid for a collapse in that trust. “A low (trust) society is not only likely to have small, weak and inefficient companies; it will also suffer from pervasive corruption of its public officials and ineffective public administration. … In Italy … there is a direct relation between social atomization and corruption as one moves from North … to South.”


Whether they be Dalton McGuinty's Liberals, Stephen Harper's Conservatives, or Ford Nation, we have been -- and are -- governed by leaders who are toxic to civic health.

Watching ford on tv the last few days attempting to appear to seriously care about his "nation" was truly vomit inducing. Only a true moron would conclude that the situation was non-emergent, and it's too bad nobody mustered up the courage to politely ask him to step aside. harper is toxic but this guy is beyond damaged goods.

I'm not going to debate your point - I don't feel I know enough to comment meaningfully - But I will ask this question: How does your thesis stand up in areas that have mandatory voting laws?

That's a good question, Anon. The answers is, I don't know. I've heard that, in places like Australia, mandatory voting works well.

But I don't have any hard data to back up that impression.

Toronto used to have a reputation as a city that worked, waterboy. Under Ford, that has been manifestly untrue.

But, then, making sure that government doesn't work is what Ford and Harper are all about.

That message of "Don't vote, it only encourages them" is a very dangerous message. Obviously, it shows no one has learned that there is always more evil, as in the case of Harper.

When folks all whined about an election around Fall of 2009, and byelections were held that November, Harpercon election placard for the Hochelaga candidate said "De l'action! Pas d'election!" Translated literally, it means "Action! No Elections!" I remember my blood running cold when I saw that, thinking that should Harper get a majority, he would get rid of elections, and like most dictators would stay until he's either bored or died.

I still believe that this is his ultimate goal to stay in power for life with no elections -- Hitler did it after he was voted in in 1932 and did not hold any elections during his time in office.

If no one showed up to vote, that would pretty much cinch the no more election happenings. We'd have a dictator in for life and after he died, it would be inherited.

The only way to protect them is to "wake and bake."

Many folks have said comparing Harper to Hitler is 'over the top' and that may be true however we must not forget that he and many other dictators across the world were first elected by a 'democratic' process (often a flawed one). These individuals and their henchmen then proceeded to eliminate the opposition by any means possible and to bend the outcome of any means of ousting them by propaganda and electoral fraud long before becoming a true dictator........ Sounds familiar?

All too familiar, Rural. Anyone with a knowledge of history should be worried.

“Don’t Vote! It Only Encourages Them!” has become very popular for good reason, where are the [honest] candidates?
Can you see toronto under george, smitherman and mcquinty both buying votes would establish the market price for kathleen shutting out low income andrea and tim. If you pick a winner as the article asserts you've simply
endorsed a toxic candidate, not voting frees you of being responsible for the shenanigans that are sure to follow.

That's exactly the problem, urban. Why give your stamp of approval to corruption?

Some anarchist fuckwads cheer on the degeneration of our limited democracy.

These idiots imagine that once we have no say over who governs us then we will govern ourselves.

I've tried patiently to explain to these turds that in a society where sometimes 40% of voters support semi-fascist "conservatives," the absence of representative democracy and the rule of law isn't going to make for pleasant living conditions for them.

The people who support these folks appear to be immune to evidence or any kind of logic, thwap.

So far, they are a minority. But, so far, they have also managed to get their way.