They Call That Accountability 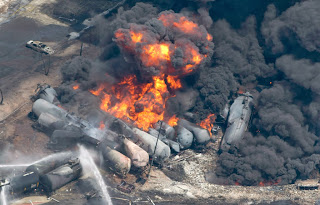 Last week, the Harper government announced that it was going to tighten the rules on the transportation of petroleum by rail. But, for this government, the proclamation of the rules and the enforcement of them are mutually exclusive propositions. Cutbacks cripple enforcement. David McGuinty says:

“My first concern is the cuts (are) beginning to take effect on the good people at Transport Canada,” he says. “There’s a serious capacity crisis.”

Transport Canada has been “victimized” by budget cuts since the current government assumed office, McGuinty says.  “In seven and a half years we’ve had five ministers. The department isn’t being taken seriously with a series of junior ministers (who are) going nowhere.” Frequent ministerial switching blurs accountability.

So who’s to blame for the rail safety budget being cut by 19 per cent between 2010 and 2014? Or the $14-million budget for transportation of dangerous goods being reduced by a million dollars over the same time frame?

Accountability mechanisms are so weakened by cutbacks that staff can’t meet their own targets. A plan to analyse the performance of all federally-regulated railways operating in Canada by March 31, 2012 wasn’t half-completed by the department’s own deadline, Auditor-General Michael Ferguson warned last month.


It's become a well established pattern. The government says it supports a policy and then cuts the money needed to support it.

They call that accountability.

Owen, you should read Wendy Gillis' in-depth piece on Lac Megantic and the lingering oil nightmare that besets the town.

It's a brilliant piece of journalism.

Thanks for the link, Mound. It will take years to clean up Megantic.

accountability to whom? Harper and his cons are accountable to no one except the 1%ers who finance them. If anyone thinks they are accountable to the citizen/taxpayers of this country, think again. They have a majority in parliament and they can do as they please. it pleases them to cut oversight in important programs they will do it. People die, they don't care. They are in power and that is all that is important to them. we had lac Megantic and we could have a dozen more but do not think the cons will change their ways. None of theirs were killed so they don't care. it is that simple. people voted them into office and now we will all have to live with it. If we had a dozen more I wouldn't even expect there to be protests.

I have a friend who lives in Nantes, who is also now the newly elected mayor of Nantes, the town just outside of Lac-Megantic where that train started having trouble with a fire just before careening down that hill.

That railroad is now open for business again and Montreal Main is also allowed to travel again. No changes were made. No new regulations. My friend believes this could happen again.

They divide the world in to us and them, e.a.f. As long as the damage is done to "them," nothing will change, e.a.f.

Under another government, CK, someone would be found criminally responsible for what happened in Megantic.

But this is a government which denies responsibility -- criminal or otherwise.