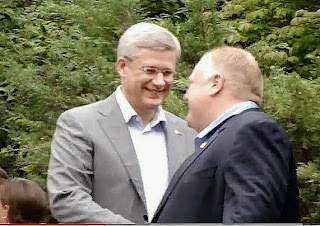 On Thursday, Andrew Mitrovica summarized what we know about Rob Ford:

We now know this about Ford. He is a habitual liar. He is said to have uttered racist and homophobic slurs. He pisses behind elementary schools in broad daylight. He has repeatedly exchanged suspicious packages at suspicious times with an alleged drug trafficker who was once his occasional driver.

He threatens to kill people. He refuses to be interviewed by police who have — ever so politely — asked him to answer a few questions. He’s purchased and consumed hard drugs. His friends and acquaintances include an alleged extortionist and gangsters, who were apparently willing to blackmail Toronto’s mayor over video showing him smoking cocaine from a crack pipe. He may have offered thugs $5,000 and a car for the video. A young gang member he was pictured with outside an alleged crack house was subsequently murdered. That man may have had a copy of that infamous video. A former Ford staffer feared that the man’s homicide may have been connected to the crack video. Drug traffickers “love and respect him.”


The day before, Lawrence Martin, writing about the Harper government, declared:

Never in all my years of political coverage have I seen a government get caught up in so many deceptions, falsehoods and bare-assed lies as this one.

It has reached the point where it is becoming difficult for any journalist to accept anything Stephen Harper and company say at face value.

The problem is that we knew that both of these men behaved this way before we elected them. Time has only confirmed that behaviour is spades. The question is, knowing what we were getting, why did we elect them? The answer is in their common program: Lower taxes, and bitter resentment.

They have delivered on both promises. And now we must pay the piper.

Email ThisBlogThis!Share to TwitterShare to FacebookShare to Pinterest
Labels: Ford And Harper

Therein lies the problem Owen, despite the fact that the behaviour of these men lies in contrast to how they like to portray themselves, they can still win elections. I'll just add the female version Christy Clark, who demonstrated her incompetence repeatedly, but after some heavy coaching, managed to win a majority in BC. It's more about saying the right things than it is substance, and apparently that's ok with those who bother to vote.

Your conclusion is so sadly true, Owen, and it will continue to be thus until two things happen: more eligible voters turn out at the polls, and more people start thinking of more than just their so-called bottom line. A tall order, I know.

The cynical among us might conclude that there is no shortage of fools, waterboy.

It seems to me, Lorne, that we are at a crossroads: We can either give up, concluding that the situation is irredeemable. Or we can take a cue from Nelson Mandela and put into practice what William Henley wrote:

I am the master of my fate.
I am the captain of my soul.

There appears to be an appetite.

Thanks for the link, Brian. Sun News proves that you need not be intelligent or wise to make it on television.

All you need do is be outrageous.

You cant handle the truth.
Ford is a hero of the ZSRDF

At last, a manifesto from Ford Nation, Steve -- although they may not understand that it is tongue-in-cheek.

Or, if they do understand, I'm sure they're convinced that -- once again -- they are victims.