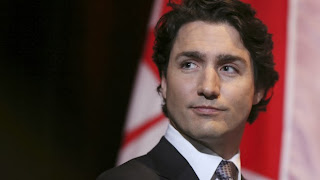 There's been a lot of talk about Michael Chong's Reform Act. But, curiously, neither Justin Trudeau  nor Tom Mulcair is doing any talking. Lawrence Martin wrote yesterday that:

For a long time, the Liberals and New Democrats have been questioned about the need to prepare grand reform and for a long time, they’ve hesitated. They say they already have some proposals in their party platforms. There are some worthwhile measures, yes, but not the type to draw attention like Mr. Chong’s. Nor is the public aware of them. They haven’t bothered to give them a big push.

With his freshness and youth, he is best positioned to bring forward a new democratic vision, one that will appeal to the younger generations so turned off politics.

A broad reform plan works in so many ways. It’s not an issue of the left or right, but cuts across party lines. It’s not an issue that requires big expenditures from the public purse – the Conservatives will be at the ready to decry any new opposition program proposals as tax-hike schemes. This issue will not give them that opportunity.


If there is an issue that appeals to the young who don't vote -- the segment of the population David Herle calls "The Spectators" -- it's parliamentary reform. They stand to benefit the most from the Reform Act. According to The Spec.com:


What's truly interesting — and even spooky — about them is that, for the most part, it is not apathy, not ignorance, not the generational aberrations that accompany being young, that shape their beliefs and values but a concrete rejection of established social institutions coupled with fear that the Western idealized dream of progress forever is dead and that what's coming down the road toward them, economically and socially, is not nice.

Samara, in its study on the politically disengaged in Canada ("The Real Outsiders"), has found a widespread parallel feeling of powerlessness and rejection of the current institutions of Canadian democracy as effective instruments of the people's voice.

Trudeau says he is targeting young voters. Parliamentary Reform should be his issue.

Email ThisBlogThis!Share to TwitterShare to FacebookShare to Pinterest
Labels: Trudeau and The Reform Act

REform of any kind won't sway younger people to the ballot box. They can make any excuse they like, but when it comes right down to it, let's be blunt, shall we? They are L-A-Z-Y!! Too lazy to get off their duffs. It interrupts party time. If they don't like what I say, too bad. Stop whining and prove me wrong is what I say.

Another thing to remember, older people and a lot of middle-aged people vote.

The median age in Canada these days is past 40.

That was why I was happy to see one Mme Muguette Paille, unemployed 55 year old from rural Quebec in the Mauricie region obtain 15 minutes of fame during the French language leaders debate during the 2011 federal election campaign. These are the people to reach.

People like Muguette Paille didn't care about reforming elections or the house.

Most don't care about that nor do they follow CPAC or any political shows on TV. They care about finding a job and the ageism displayed by employers (yes ageism is alive and well -- my partner is 54 and lost his job after nearly 25 years of service.

And health care. With all of our health conditions, the fact that Harper is slashing 36 billion to health care transfers and pushing us further to American corporate health care is going largely unspoken.

A little off topic, but all this to say that maybe it's time to stop focusing so much on the young and start focusing on folks over 40, who are the majority in this country and who actually do go vote.

As for Chong's bill, Mulcair ain't sayin' a lot about it neither, but from what I hear, he is as controlling over his own party as Harper is of his.

They're leaders they don't want to see themselves potentially cut out of a job from their own caucuses. Remember what happened during that whole Jean Chretien- Paul Martin debacle? From what I have heard, this bill as is could start other such infighting.

Another problem is that like it or not, wrong or right, most voters vote for the leader of their favourite party, not the MP -- I doubt that most even pay attention to the names of the riding candidates on the ballot. Rarely have we seen cases of voters actually voting for the MP. Therefore, I doubt many would be happy at the idea of a disgruntled caucus kicking out a leader they voted for.

The bill is a good start, but man, does it need work.

I agree that ageism is alive and well, CK. I'm sure your partner is angry about being treated so cavalierly. And there are lots of folks like him. A good friend of mine was let go after 31 years at The Bay. He's no friend of the Conservative government, either.

What worries me about the disengagement of the young is that it doesn't bode well for the future.

Old teacher that I am, I worry when the young don't see a future ahead of them.

It would seem that both the Liberals and the NDP are but giving lip service to any idea of Electoral and Parliamentary reform, yes they support it, sort off, when it suits, but lets not rock the boat! If such reform was indeed the thing that will get our youth 'engaged' in our political future then you would think that they would be flocking to the Green Party who have long advocated Democratic reform and whos leader has practised the ideals set out in their platform. Unfortunately this does not seem to be the case, whether from lack of exposure to the true position of the partys on this, a general disgust of politics in general, or that feeling of total helplessness to have any effect upon the outcome at the ballot box, is open to question. Even the most engaged of us are going to have great difficulty in 2015 as to who to vote for, it will be another ABC (anybody but the conservatives) for so many of us, but who to vote for that will actually be in a position to institute a return to democracy is the big question.

I doubt that many do think of the future. All they care about is what Lady Gaga is up to and who the Kardashians are dating and the most political they may get is wondering what the Will and Kate show are wearing to any given event.

I'm sorry about your friend. I think i'm safe in saying that my partner can sympathize with him.

Make Civics a mandatory course in high schools and do like Australia and Belgium -- make voting obligatory. I've read up on both of those countries, folks where they must vote do tend to be more politically aware and engaged.

Before I retired, CK, the Harris government made civics mandatory in Ontario high schools. My experience was that it did little to improve either the knowledge or the engagement of the young.

It would be interesting to see what would happen if voting also became mandatory. Perhaps Rob Ford wouldn't be mayor of Toronto.

And sadly, Rural, if the prime minister can manage to divide the opposition, he'll stay put.

On your last "And sadly, Rural, if the prime minister can manage to divide the opposition, he'll stay put." if you were a carpenter you could not have hit the nail on the head any better.

Why do you think despite the fact that Elizabeth May and the Green's which she alone represents are allowed to sit in parliament? You guessed right it's in herr harper's & his travelling band of con criminal weirdos favor to split the vote...

Harper's strategy has always been to divide and conquer his opposition, Anon.

The more the opposition parties squabble with each other, the more they ensure Harper's ugly legacy.

yes stevie slime has done well with his divide and conquer. The other political parties fall for the game each time. Instead of standing up and saying, hey wait a minute, we may not agree on policy, but attacking the leader of the "whatever" party is not good for democracy.

Young people are disengaged from the political process because it doesn't have any meaning for them. They don't even vote in local elections, nor do many of them run for office.

It is all well and good to try to focus on those 40 and over, however, once we are dead, who will decide how our country is run. Do we slip into a dictatorship? Perhaps what is needed is for parents who do vote, to discuss the need to vote with their children. The first time I voted was 1969. Knowing I'd be out of the country on election day, my Mom took me to an advanced poll. I voted and haven't stopped.

Australia's laws for voting certainly has helped participation. Perhaps Canada should do the same thing, but then it is doubtful the mainstream parties would be in favour of such things. Their success frequently depends upon getting "THEIR" vote out. Having another 40% of citizens coming out to vote would throw a wrench into their plans.

We get the government we deserve. at some point even those who don't vote will find life so difficult in Canada, they will go out to vote. It is just such a painful process to get there.

If people don't like the mainstream parties, find a local candidate and run as an independent. Stranger things have been done.

When apathy is replaced by outrage, e.a.f., people will vote. You would think that -- by now -- Mr. Harper would have stoked the fires of outrage.