Knowledge Is Their Enemy 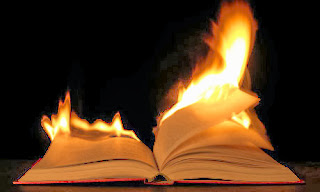 Since they came to power, the Harperites have insisted that there are all kinds of things we can't afford. Their latest claim is that six Department of Fisheries and Oceans libraries no longer serve a purpose. In the digital age, they argue, the libraries simply take up space. But Andrew Nikiforuk writes that a secret government memo reveals that the government's claim has nothing to do with digitizing books:

In fact, the document, a compendium of cuts to the Department of Fisheries and Oceans that can be read in its entirety at the bottom of this story, mentions only the "culling of materials" as the "main activities" involved as the science libraries are reduced from nine to two. Specifically, it details "culling materials in the closed libraries or shipping them to the two locations and culling materials in the two locations to make room for collections from closed libraries."


Scientists have warned for a long time that this government is at war with knowledge:

As reported by The Tyee earlier this month and again here, scientists are sounding alarms about libraries dismantled by the government, including the historic St. Andrews Biological Station (SABS) in St. Andrews, New Brunswick, where famed environmental scientist Rachel Carson did some of her research for her groundbreaking book on toxins, Silent Spring. Also shut down are the famous Freshwater Institute library in Winnipeg and one of the world's finest ocean collections at the Northwest Atlantic Fisheries Centre in St. John's, Newfoundland.

Scientists who use the libraries say priceless information -- essential for the legal and political security of Canada's waterways as well as the defence of the longest coastline in the world -- was thrown into dustbins, burned or scavenged by private consultants. In Winnipeg, a consultant's group operating for Manitoba Hydro backed up a truck to collect materials from the dismantled library.


Like any well run criminal enterprize, the Harper government is focused on destroying evidence. And just how much money is being saved?

In fact the closure of libraries containing vital material nearly 100 years old on the state of Canada's fisheries, freshwater ecosystems and oceans will save taxpayers just $443,000 a year, according to the document.

In one case the government closed the climate-controlled library at the St. Andrews Biological Station in New Brunswick just after the government spent millions modernizing the famous facility.


They continue to claim that they specialize in financial management. But, like the prime minister's claim that Nigel Wright acted alone, that is a lie.

On an entirely different note, Happy New Year to all.

Email ThisBlogThis!Share to TwitterShare to FacebookShare to Pinterest
Labels: Harper's War On Science

Fostering ignorance will probably be one of the key 'legacies' of the Harper government, Owen. But then, of course, there is the willful ignorance of so many others that has aided and abetting it.

Happy New Year to you, Lorne. Perhaps 2014 will be the year the willfully ignorant will come to the conclusion that they are their own worst enemies.

This has been the behaviour of so many past regimes pretending to act as "representative" government. It's just a first for Canada and, I suspect, an entrenched Westminster governed democracy. There are other examples of this in history ... the names just escape me at the moment. If I recall, there were dire warnings about them too ... which were ignored. Recovery was ugly.

Happy New Year Owen. Your blog. and those of Lorne, Mound, Simon, Alex and Cathie (amongst many others) help keep me sane. So, I say, thank you.

Thanks for your support and good wishes, Anon.

I always try to think of the fountain of light.

That's what keeps us going, Anon.

Your site is one of my favorites Owen.

However. Harper dismantling library's, is only the tip of the iceberg of what, Harper is doing to this country.

We don't even know, how much of Canada Harper has signed away, to a foreign country. We know he is giving foreigners the resource jobs.

I really doubt, Canada will survive Harper. As Harper said? When I get through with this country, you will not recognize it. Those are the only true words, Harper has ever uttered.

He's absolutely committed to remaking the country in his own image, Anon. And that's why he's a dangerous man.

Owen, Lorne, Dave - don't count on others to change in 2014. I and you and all of us have to make this our year of change. If we won't create change, how are we to expect if of anyone else? We know how to do this. We were born knowing how to do this.

When I was much younger I was fond of Egyptian history and I read whatever I could get my hands on about the subject. One thing that constantly horrified me was the carving over and chipping out of the details of the last pharaoh. I think about that a lot lately when I think of this government.

The analogy between Mr. Harper and the Pharaoh is interesting, Karen.It fits.

Mr. Del Mastro's rise and fall is emblematic of exactly what is wrong with the Harper Party, Ochaye.

You're right, Mound. It's easy to forget that change starts with each one of us.

And, as the planet continues to buckle under our own folly, the need for change becomes more and more obvious.

.. the salamanders are remiss ..

Your site and observations and how you share them
are a daily 'must read' .. and the privilege of being able to comment - priceless..

the salamanders have spoken ..

I -- and I'm sure those who return to this site -- always look forward to the salamanders' comments.

They are insightful and witty; and they always put things in perspective.

Happy New Year to all.