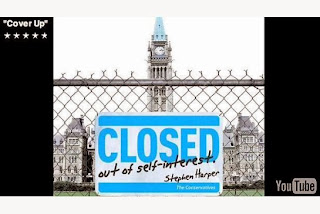 We learned in the Throne Speech that the Harper government was consumer friendly. But this week -- when Canadians learned that they would be paying more for less service from the Post Office -- the House of Commons was empty. Andrew Coyne writes:

Not only was the House of Commons conveniently shuttered, but neither the minister responsible, Lisa Raitt, nor any Canada Post executives were on hand to answer questions regarding this drastic reduction in public services. But then, in this they were only following the example set by the prime minister, who has for months avoided answering questions about the scandal that is slowly destroying his government.

He does not answer the questions put to him in Parliament — simple questions of fact, on matters he would be in a position to know about, that one would think could be dispatched with a quick yes or no — when he chooses even to pretend to. He does not hold press conferences, in any but the most perfunctory sense. He does not consent to interviews, except under the tightest of conditions, and with the friendliest of interviewers.


It's come down to self preservation for the prime minister:

because the story he has been telling — of a conspiracy among virtually everyone around him to dispose of a matter in which he had previously taken a great interest, in a way that he now insists he would have prevented had they not, all of them, lied and kept him in the dark — is not credible. It is indeed an open question whether he will consent to the sort of in-depth year-end interviews that prime ministers traditionally conduct. How can he?

He has closed down all roads of inquiry -- most recently in the Senate:

I refer to the decision by the Tory-controlled Senate internal economy committee to refuse to call as witnesses any of those alleged to have taken part in the audit tampering. The committee — which, after all, had commissioned the audit in the first place — had earlier made a show of investigating the matter, hearing testimony from those responsible for conducting the audit that confirmed, at a minimum, there had indeed been highly improper inquiries made by a senior partner at the firm, Michael Runia.

His government is in lockdown. And he's getting away with it.

Email ThisBlogThis!Share to TwitterShare to FacebookShare to Pinterest
Labels: Government In Lockdown

What gets me Owen is that there is no real precedent for this behaviour in previous Canadian parliamentary history.

"First, facts about Canada. Canada is a Northern European welfare state in the worst sense of the term, and very proud of it." -from a speech made by Stephen Harper, then vice-president of the National Citizens Coalition (NCC), in June 1997.

Its interesting to note that the NCC was founded by wealthy Canadians who were and are unsatisfied with how Canada was prior to Harper's 2011 election. The Canada the majority of us want to keep except the corporate elite who are now pulling the strings. This is a repeat of history in how the Nazi Party came to power in the 1930's. They came to power through the largesse of the bourgeois and the wealthy industrialists who demanded anonymity and were happy to have a lunatic be the front man. (Nazism was/is Fascism) Sound familiar? It should as we are watching it unfold in Canada right before our eyes complete with a lunatic frontman.

I'd rather live in a Northern European State than the fascist state Harper and his corporate masters are setting up, as we speak. That is why all the secrecy, Conrad Black and many other rich Canadians support this whole heartedly although you would never get them to admit it publicly.

These are the aims of the NCC and as you can see Harper is giving them all of it and more: the following is from -

After New Years Little Stevie will ride in and save the day for all the urban seniors who need door to door delivery. Then it will become another nail in his pro-consumer platform.

continued quote from link above (mogs)

"NCC has campaigned prominently on many libertarian, anti-worker and anti-public service issues over the years including:

•campaigns to "de-unionize" the workforce;
•opposition to fair tax reform;
•privatization and/or elimination of public sector services;
•discredit any activity carried out through the public sector such as education or health care;
•court challenges to social unionism;
•"closed shop" provisions in Canadian labour law;
•lobbying campaign to have "right-to-work" legislation implemented in Alberta;
•legal and advertising support for challenges to Canadian Wheat Board;
•court challenge to annul election of BC NDP government, advertising campaigns against targeted politicians and parties;
•media campaign attacking MP pensions;
•court challenges to electoral laws that would limit third party spending;
•media campaign attacking grants for the arts, advocacy organizations, and social science research;
•attacks on public funding for what it calls "interest groups" such as human rights or women's groups."

To this above list add because of Harpers religious machinations which take the old testament literally and verbatim, despite the scientific and geologic evidence refuting this literal claim. (Also then giving man and his legal fictional entity - corporations total domination of the earth and all upon it, that's why the right in the US is lobbying to have personhood endowed on corporations with all the rights and privileges of man in order not to conflict with the religious faction of the right wingers.)

1) Debunk science and throw it out of the equation as it is in direct conflict with the bible, which is the only truth and therefore science is heresy and needs to be eliminated.

2) Sellout of all natural resources including water, secretly in a rabid manner maximizing corporate profit with no gain (actually a net loss considering loss of employment and environmental degradation) for Canada's citizens and with no concern for how those are removed from Canada for her people or her environment.

3) Conduct all trade negotiations in total secrecy as well as most Harper Government domestic business as is possible to be contained behind this cloak of darkness.

4) Allow the US Government, its agencies and corporations full access to the Canadian landscape both physical and social.

6) Remove environmental protections so foreign and domestic corporations are not responsible for polluted watersheds, ground water contamination or any other environmental damage in the process of stripping Canada bare of her natural resources.

7) Remove special status for First Nations as they need to be assimilated or eliminated.

8) Remove all public input that has not been thoroughly filtered and/or white washed to fit the fascist corporate controlled state doctrine with Stephen Harper as both its figurehead and father image (hence the lap kittens and photos of herr harper gracing every imaginable place in the parliament buildings).

9) Organize police into a paramilitary force and build new prisons to contain the ground swell of opposition these measures will create.

This is the danger of Harper and his rabid religious right corporate groupie followers lead by the secretive fascist corporate masters.

Harper's support is crumbling, Mogs, -- slowly, to be sure -- but crumbling, nonetheless.

Yet he will not change course. He believes that, in the end, Canadians will give him a free pass.

There never was a pro-consumer platform, Anon. Mr. Harper favours the people who make the money, not those who spend it.

Yes Owen you are right the coalition of the weird, moronic, religious, radical right and the unsuspecting is quickly dissolving hence this exchange:

"Bitter divisions inside Stephen Harper's cabinet over Toronto Mayor Rob Ford recently erupted on the floor of the House of Commons and triggered a profane battle between two of the prime minister's most powerful ministers."

Profane, who would have thought...

"Several cabinet and caucus sources said Finance Minister Jim Flaherty was unable to hold back his fury after Employment Minister Jason Kenney became the first member of Harper's cabinet to call on Ford to resign on Nov. 19."

I agree Fort should resign...

"In a voice loud enough for several of their cabinet colleagues to hear, Flaherty told Kenney to "shut the f--k up" about Ford."

Oh, I see; protect the criminal right who scare people as we may need them later as henchmen...

"Kenney responded angrily in kind, and although the two men were separated by four other ministers, alarmed caucus colleagues, who requested anonymity, were concerned the bilious debate might escalate beyond their control.


"I thought they might come to blows," said one MP who was not authorized to speak publicly about the incident."

So the true colors of Harpers house of commons 'coalition of the religious right, the political extreme right wing and the near right' is finally breaking at the seams Harper and his overlords hastily stitched together to form a majority government.

These folks have always carried the seeds of their own destruction, Mogs.

That will happen when they turn their intolerance for others on each other.

perhaps they are sowing the seeds for their own destruction, but don't count on it. B.C. re elected the provincial lieberals after all the corruption and child poverty. How is it working so far. Well we have the highest poverty rate in Canada, 18.6%, one in five children. the provincial government hasn't mentioned it at all. When questioned the minister responsible was unavailable for comment. James Moore, a B.C., M.P. doesn't think its his problem either, that children go hungry.

Most voters will simply ignore it all, until it hurts them personally and by then it maybe too late. the opposition parties have not gotten their acts together. beyond some bloggers and social groups there isn't much discussion even in this country about what is going wrong. Not until stevie slime defunds our health care system will people begin protesting. By then it will be too late.

They have successfully peddled the notion that "you're on your own and your only responsibility is to yourself," e.a.f.

And the results speak for themselves.