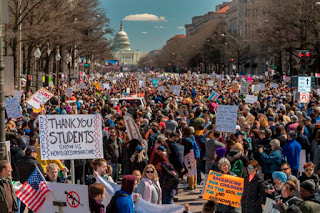 Rather than return her juvenile taunt in kind, the 17-year-old Hogg rose above it — and then used his new-found fame to summon an advertiser boycott of her show, “The Ingraham Angle.” She apologized, grudgingly and weirdly. “Any student should be proud of a 4.2 GPA — incl. @DavidHogg111. On reflection, in the spirit of Holy Week, I apologize for any upset or hurt my tweet caused him or any of the brave victims of Parkland,” she began the first of two tweets.


This generation of young people are different than their immediate forebears:

Young Americans from all walks of life continue to display qualities too many older Americans do not — tolerance, technological sophistication, political engagement, concern for the environment, etc. The Associated Press reports:

A majority of young people believe President Donald Trump is racist, dishonest and “mentally unfit” for office, according to a new survey that finds the nation’s youngest potential voters are more concerned about the Republican’s performance in the White House than older Americans.

The poll from The Associated Press-NORC Center for Public Affairs Research and MTV found that just 33 percent of Americans between the ages of 15 and 34 approve of Trump’s job performance. . . . Nearly half of younger Americans, 47 percent, say they’re personally paying closer attention to politics since Trump’s election; 2 in 10 say they’re engaging in political activism more than before.

In an age of cynicism, when the president and many Republicans show contempt for science, women and minorities, the poll discovered that “young people overwhelmingly support watching out for minorities: 69 percent favor a pathway to legal status for immigrants brought to the country illegally as children, 59 percent favor protecting the rights of LGBT citizens, and 58 percent say the same for Muslims.” Sixty-seven percent said they want a health-care system in which ‘the government provides health insurance to all Americans,’ and 60 percent say they want the government to address climate change.


Many in power haven't figured it out yet. But change is coming -- whether or not they get out of the way.

Image: St. Cloud Visitor
Posted by Owen Gray at 9:29 am

Email ThisBlogThis!Share to TwitterShare to FacebookShare to Pinterest
Labels: Youth And Change

Indeedy doo, change is coming which will then be co-opted, branded, marketed, monetized for obscene profit and corrupted beyond recognition leading the instigators to wonder, 25 years later, what exactly they accomplished and wish they hadn't wasted their time.

We always say that the younger generations are our hope for the future, Owen. The way these young people are so effectively conducting themselves gives substance to that hope.

Given what we now know about Facebook, Deacon, that's a distinct possibility. But we can hope that the kids are on to that.

Hope is hard to sustain these days, Lorne. But my hunch is that this hope has legs.

.. I keep telling people to get ready for April 20.. the schools will empty.. the dangerous sumpremacists will be out in force, armed and 'proudly' seeking confrontation.. and battle. They are crud of course, but useful tools for Trump et al. The creeps like Alex Jones will pimp their conspiracy insanity and Trump will tweet some inane law n order nonsense pulled from his arse.. but it will be historical and astonishing & real.. and Trump et al will go hysterical dustbin surreal

These are not easy times for anyone, sal -- particularly the young. These times are particularly tough because the Orange Old Man wants everything for himself. Aand he's prepared to do whatever it takes to get it.