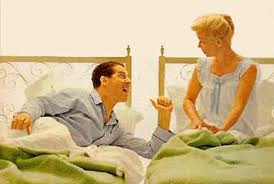 E.J. Dionne writes that last night's Republican candidates debate was like listening to that popular radio program from the 1940's, the Bickersons. But instead of Don Ameche and Frances Langford, viewers were treated to Mitt Romney and Rick Perry putting each other down:

For the most part, Romney was fluid and fluent, as is his habit. But I thought the particularly bitter exchange he had with Perry, over whether Romney had hired an illegal immigrant, hurt Romney more than Perry. There was petulance and perhaps a trace of arrogance in the way Romney kept badgering Perry. “It’s been a tough couple of debates for Rick” and “You have a problem with letting people finish speaking” are Romney lines that will get played over and over, and I don’t think they came off well. In truth, neither Romney nor Perry looked great when they went into junkyard-dog mode, but it may be a net win for Perry, because he put himself on the same level as Romney.


That said, Dionne speculates that the real winner of the debate may have been Barack Obama. Rather than attacking the president, the Republicans have broken Ronald Reagan's eleventh commandment: Never speak ill of a fellow Republican. More than anything else, the debate illustrated how far the Republican Party has come since Reagan. The problem, of course, is that the distance has been a march to the rear -- and Reagan used to be a wild-eyed radical.

Perry wants to "defund the United Nations;" and Bachmann wants Iraqis to reimburse the United States for all the good America has done for -- or to -- them. Normally such a collection of chuckle heads, like the Bickersons, would be the source of uproarious comedy. But, if Sophocles had been in the audience last night, he would have recognized the kind of drama he was watching.