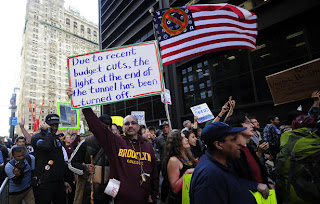 The Occupy Wall Street Protests are moving north. Under the banner "Occupy Toronto," protesters are due to take to the streets on October 15th. It's easy to dismiss these folks -- as many have -- as simply lazy kids with nothing better to do. But, as Tom Walkom writes in this morning's Toronto Star, that would not be wise:

While the aims of the Wall Streeters remain distressingly vague, they do seem to be coalescing around a notion that American capitalism is fundamentally unfair — that it benefits only a tiny minority while leaving the rest disadvantaged.


That is a powerful message -- not only for Americans, but for Europeans and for Canadians, too. And history shows that small protests can explode -- particularly if the governing elites are not paying attention:

The Paris revolt of 1968, which briefly united students and parts of the industrial working class, almost brought down the French government. Yet it began with a series of relatively minor complaints about conditions in the country’s universities.


Egypt’s revolt last spring, which resulted in the toppling of Egyptian President Hosni Mubarek, had its genesis in something called the April 6 Movement, a small group of regime critics who until this year had been spectacularly unsuccessful.


In short, history shows that, given the right conditions, tiny protests can suddenly blossom.


At the moment, no one can predict what impact these protests will have. One thing is sure. The tools of democracy have worked hard to protect institutions which are too big to fail, while those who are deemed too small to pay attention to are barely keeping their heads above water.

It would be foolish to dismiss these folks any longer.They may not have money -- but they do have numbers. And those numbers, once mobilized, could make life for those with money very uncomfortable.

This entry is cross posted at The Moderate Voice.
Posted by Owen Gray at 9:04 am