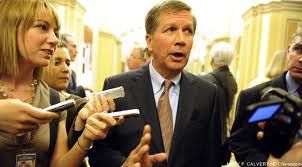 Tom Walkom writes this morning that, when times get tough, people look for scapegoats:

In Germany after World War I, the scapegoats were Jews. In Canada during the slump of 1919-20, popular anger was taken out on Polish, Finnish, Russian and Ukrainian immigrants believed to be Bolshevik agitators. Many were rounded up and jailed without trial at the Kapuskasing internment camp in Northern Ontario.


But the Harper government isn't quite so openly xenophobic. Those it seeks to blame for  our current economic malaise are unions:

This is the significance of its extraordinary intervention in two Air Canada labour disputes.

While it is common for governments to beat up on their own workers, it is most unusual for them to take sides in private sector disputes, particularly in a competitive area like air travel.

The government’s stated reason for intervention in the Air Canada disputes — that it was protecting the economy — was laughable. This was particularly true in its first intervention, against striking ticket agents.

That strike, which did not involve air crew, would not have stopped Air Canada from
flying..

It's a tactic which has been tried recently in Wisconsin and Ohio -- although it's interesting to note that, in Ohio, Governor John Kasich's attempt to destroy the state's public service unions is up for recall. And, according to Talking Points Memo, the tide is running heavily against Kasich:

The Quinnipiac poll showed that 56% of Ohioans think that SB 5, the new anti-union law passed by the Ohio Legislature and signed by Kasich, should be repealed, with 32% saying it should be kept. Independent voters favor repeal 52% to 33%, and even a little more than a third of Republicans want it scrapped. State residents may have that chance this November, as pro-union forces delivered more than five times the needed amount of signatures to force a ballot referendum.


All of this is immaterial to the Conservatives, of course. As Texans suggest that Harper's plan to build more prisons is fiscal folly, the government -- like the Titanic -- speeds ahead towards the iceberg. If it were really paying attention, the government might take a good look at Ohio -- because what goes around, comes around.
Posted by Owen Gray at 8:47 am

The problem here, in Canada, is that we're going backward as a society, while the US is, albeit slowly, moving forward.

I don't think a petition repealing any kind of anti-union, or even preventing legislation to claw back labour standards for non-unionized workers, would fly these days. For some weird reason, I even get the feeling that many would love to see slavery come back. I have received such emails to this effect, believe it or not.

Many Canadians, sadly, even many of those who are unionized workers of some stripe, have swallowed the kool-aid.

I even heard Ryan Doyle on his radio show awhile back come out and blatantly say that the cause (and the only cause in the world according to him)of the global economic crisis was because of unions and 'workers who want too much.' for his liking.

I only hope that Canadian working class will wake up and smell it before it is too late and labour has already been set back by about 100 years.

As is so often the case, ck, people forget history. They forget that the five day work week, pensions, workers compensation etc. were all hard won benefits.

There are many in my generation -- and yours, too -- who have no knowledge of what came before them.

A retired teacher, I lived through six strikes -- four in Quebec and two in Ontario. None of them were pleasant experiences; and I wouldn't wish any of them on anyone.

However, I value my pension and the education I have been able to provide our three sons. I have benefited because I belonged to a union.

The people in power -- most particularly Mr. Harper -- have no appreciation for any of that.

Ah, teacher's strikes in Montreal. I remember growing up with that. My Dad was regional rep of the MTA in the early 80s.

Yes, there was a time when teacher's strikes happened at the end of each contract.

We were political footballs back then. In fact, we still are.