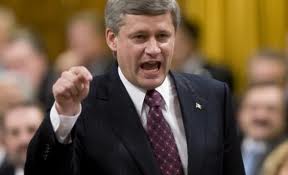 Stephen Harper is a dreadful prime minister. But we would have made a superb minister -- the kind who stands smugly in a pulpit. He truly believes he is a member of the elect -- and his vocation is to bring everyone else into the promised land.

In this morning's Globe and Mail, he lectures his European brethren on their lack of fiscal virtue, warning them they must get religion:

To be clear, this crisis could have been contained. Instead, it grew. The good news is that this crisis can still be contained and reversed. The bad news is that, unless decisive action is urgently taken, our nations will once again be forced to respond to a full-blown global recession, albeit this time without the full arsenal of policy weapons at our disposal.


Harper chides Europeans for not acting decisively. But he does not question the austerity agenda they have followed -- an agenda he championed at the last G20 conference, and which he touted in a side trip to Greece earlier this year.

Harper has no doubt that austerity is the answer to the world's prayers. But, besides suffering from terminal certitude, he preens and -- yet again -- blows his own horn:

In Canada, our government has taken these challenges seriously. We have backed our words with strong action. We have a prudent, medium-term plan to return our budget to balance and protect our strong public finances. We will meet G20 deficit and debt targets well ahead of schedule. Yet, we also are implementing a pro-jobs and growth agenda that is focused on promoting investment, hiring and the retention of workers affected by the global economic downturn. In short, we have sought to strike the right balance between supporting jobs and growth, and reducing our deficit in a responsible manner.


Of course, like everything else Harper does on foreign policy, this is all for domestic consumption. When Canada lost its bid for a seat on the Security Council, the international community passed judgment on Stephen Harper. Under this prime minister, Canada has become an international scold.

As a clergyman I am a little offended that you would draw a parallel between Harper and the profession. It is a broad broom you are sweeping with. I wish you had referred to him as an evangelist. Harper is a ideolog. He thinks he has the solutions and it should fit all situations. We may yet need more stimulus efforts. The last time the Conservatives had to dragged into it by threatening oppositon and more likely by his wanting to follow the American lead.

I read recently his colleague from the Huntsville pork barrel riding has to admit in the US that the Conservatives, and Canada's economic good fortune is largely do to the efforts of the previous Liberal government, particularly the work of Paul Martin.

I'm sorry I offended you, Philip. You are right. I have used a broad brush. I should say that I do not hold all clergymen in disregard. These days, being a clergyman is one of the most difficult professions one could choose.

One reason for that is there are some in the profession -- someone like Jerry Falwell, for instance -- who rail about sin but have no sympathy for sinners.

As I read the story, Jesus spent a lot of time with those folks and was roundly criticized by people like the Pharisees. Perhaps I should have chosen that analogy.

Thanks very much for sending the link. As it suggests, the real sin is a failure of imagination.