The Costs of Inequality 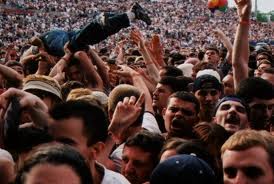 Alex Himelfarb writes that, like our neighbours to the south, Canadians are falling into The Inequality Trap. And he warns that accepting that trap as a fact will have horrendous consequences:

In an extremely unequal society the very rich and corporations gain too much influence.  In the competition of ideas, money always talks – but with extreme inequality money talks even more loudly.  And undoubtedly that has an impact on how we see problems and what solutions we can imagine.  We  start to internalize the talk.  At worst, some begin to think of themselves as inferior,  that others are the job and wealth creators.   Many simply feel increasingly powerless and come to view government as a foreign thing, serving  its own interests or the interests of the powerful few.  They lose faith. And they lose hope.  And the inequality trap is sprung.


That loss of faith and hope becomes endemic and everybody loses:

In a society with just a few winners and many losers, a case can be made that everybody truly loses.   When he argued for higher taxes on the rich, [Warren] Buffett also said  that the rich people he knows are generous and giving and want what’s best for the country and their kids.  They too then pay a price when they live in gated communities, when they live in fear, when the distance between us turns us into caricatures or turns us against each other.  And how do we begin to develop a sense of the common good when we are so divided?


It's that sense of the common good which holds a society together. A society where the prime directive is that it's every man and woman for him or herself becomes inherently dangerous. In the end, gated communities cannot keep out angry mobs.

The present government believes that building more prisons will ensure that those mobs won't form. It believes it is acting proactively. Like the French aristocracy in 1789, it is convinced that it can protect itself from angry mobs. Unless it has a change of heart and direction -- things which do not appear likely -- it may face a very rude awakening.
Posted by Owen Gray at 11:29 am

Email ThisBlogThis!Share to TwitterShare to FacebookShare to Pinterest
Labels: The Inequality Trap

Inequality becomes the bedsore of a crippled society. Our children, Owen, will grapple with this if only because they'll have no other choice. Inequality, the burgeoning gap between rich and poor, is utterly corrosive of social cohesion.

This problem is worsening in conjunction with another and they must synthesize. We're running out of stuff, particularly renewable resources. The inequality problem is more tolerable in a period of stable, sustainable growth. It becomes hellish, however, when the growth paradigm falters because once growth stops all that's left is an allocation-based economy, another term for rationing.

Allocation economics or rationing entails sacrifice and it is in terms of sacrifice that inequality becomes far less tolerable than in the world of the past. The Arab Spring gives us a glimpse of the Century of Revolution that is just beginning to unfold. Inequality in wealth, opportunity, even access to affordable food was instrumental in the Middle East discontent. We're foolish to consider ourselves immune to those same influences.

It's interesting that you mention the Arab Spring, Mound. The conventional wisdom is that it is a revolt against an outdated system -- a system which has not seen the wisdom of Western ways.

The truth is that it has more to do with scarcity than tyranny. And only a few seem to notice that Western economies have been adopting the Arab economic model -- where wealth accrues to the
top.

In that sense, the Arab Spring is an old story. The problem is that our historical memory is pretty weak.

Owen, I have become convinced that irrefutable evidence of the Liberal party's disengagement from the Canadian public lies in its apparent indifference to income inequality. They should be championing the interests of the average Canadian. What better vehicle could there be for reconnecting with Canadian voters? Instead we get limp nonsense about funding for the arts or daycare. That's a party that's not even trying and deserves its descent from Sussex Drive to Stornoway to Motel 6.

Your analysis, Mound, explains why the NDP is now the official opposition.

The Liberals problem, I think, is that they have yet to grasp the reasons for their decline.

Under Chretien -- and particularly Martin -- the Liberals made a significant turn to the right; and the public understood exactly what was going on.