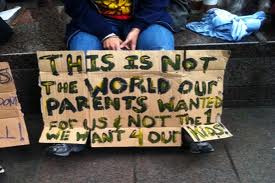 Paul Krugman writes that the Masters of Wall Street are beginning to whine: "The modern lords of finance look at the protesters and ask, 'Don’t they understand what we’ve done for the U.S. economy?'" They really do not understand why people are in the streets, because they see themselves as indispensible. What's good for finance is good for the United States. It's an example of Adam Smith's invisible hand at work. But

the financialization of America wasn’t dictated by the invisible hand of the market. What caused the financial industry to grow much faster than the rest of the economy starting around 1980 was a series of deliberate policy choices, in particular a process of deregulation that continued right up to the eve of the 2008 crisis.


The world has been turned upside down. Favouring the wealthy was supposed to make everybody rich:

Somehow, however, that wonderfulness failed to trickle down to the rest of the nation — and that was true even before the crisis. Median family income, adjusted for inflation, grew only about a fifth as much between 1980 and 2007 as it did in the generation following World War II, even though the postwar economy was marked both by strict financial regulation and by much higher tax rates on the wealthy than anything currently under political discussion.


And now ordinary folks have stopped believing the hype. Not only that -- they're angry. And those who have done so well  don't understand why the people in the streets simply won't go home. As Krugman writes,

until a few weeks ago it seemed as if Wall Street had effectively bribed and bullied our political system into forgetting about that whole drawing lavish paychecks while destroying the world economy thing. Then, all of a sudden, some people insisted on bringing the subject up again.


And they are not going away.

In their own little bubbles the banksters and overpaid teleprompter readers' stupid opinions make sense to them.

They may have grown up on Main Street, thwap. But they've lost touch with the folks in the old neighbourhood.