And That Has Made All The Difference 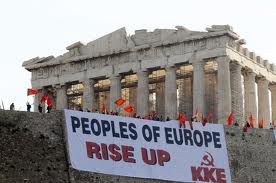 Paul Krugman has been arguing against the doctrine of "epansionary austerity" for sometime. That doctrine holds that, if governments make deep budget cuts, the economy will expand. It has become a theology among American Conservatives. Until yesterday, it was a doctrine which the leaders of the European Union trumpeted at every opportunity. And Stephen Harper has made it clear that he, too, worships at that altar.

Krugman revisits what has become the all too familiar rationale for taking an axe to government expenditures:

This doctrine was sold both with claims that there was no alternative — that both bailouts and spending cuts were necessary to satisfy financial markets — and with claims that fiscal austerity would actually create jobs. The idea was that spending cuts would make consumers and businesses more confident. And this confidence would supposedly stimulate private spending, more than offsetting the depressing effects of government cutbacks.


He then examines what has happened in the countries which have applied that medicine:

Greece has been pushed by its austerity measures into an ever-deepening slump — and that slump, not lack of effort on the part of the Greek government, was the reason a classified report to European leaders concluded last week that the existing program there was unworkable. Britain’s economy has stalled under the impact of austerity, and confidence from both businesses and consumers has slumped, not soared.


And then he turns to Iceland -- which three years ago was an economic basket case. Instead of following the conventional wisdom, Iceland made a different choice:

Where everyone else bailed out the bankers and made the public pay the price, Iceland let the banks go bust and actually expanded its social safety net. Where everyone else was fixated on trying to placate international investors, Iceland imposed temporary controls on the movement of capital to give itself room to maneuver.


Did Iceland fall into the abyss?

Iceland hasn’t avoided major economic damage or a significant drop in living standards. But it has managed to limit both the rise in unemployment and the suffering of the most vulnerable; the social safety net has survived intact, as has the basic decency of its society. “Things could have been a lot worse” may not be the most stirring of slogans, but when everyone expected utter disaster, it amounts to a policy triumph.


Yesterday, the Europeans decided that it was time for their banks to take a haircut. It will cost the masters of European finance fifty cents on the dollar. Merkel, Sarkozy et al. also significantly expanded their bailout fund. In the grip of economic disaster, they chose another path. It's not a novel solution. In fact, it's as old as John Maynard Keynes. But, as Robert Frost wrote, that choice -- in the end -- will  "make all the difference."

Good on the Europeans for making that decision.

However, here in Canada, austerity will be brought forth, for one simple ideological reason: Harper & Flaherty don't believe in social safety nets,and are quite happy gutting them--basically, for sport.

Canadians have already bought that austerity is the only way. In fact, I dare say they drank a lot of kool-aid. Harper,with the help of his media buddies will tell Canadians, well, it'll cost you health care in order to keep us safe from those dastardly Russians and those Mayhem Muslims, as well as keeping all those pot growers off the streets.

I agree with you, ck, that those will be Harper's arguments. He's on an ideological juggernaut; and the evidence which disproves his theology is simply ignored.

But, if the voters of Toronto have finally figured out that the man who runs from Marg Delahunty is a fool, perhaps there is hope for the rest of us.

The Iceland model is an excellent example that the media avoids talking about. But I suspect that Harper will pay a heavy historical price as did Hoover for not having enough sense to chose the needs of the people over the demands of their ideology.

I think that both Merkel and Sarkozy are very typically European in as much as they are traditionally conservative but not nearly as ideologically driven as men like Harper. They understand that their ideology endangers the very system that they support so that compromise is better than total destruction. Harper, on the other hand is so driven by a blind ideology that he doesn't care if his policies utterly destroy the system and so egocentric that he cannot face the idea that he could ever be wrong.

The same can be said for modern Canadian conservatives -- not least of all for Stephen Harper.

Merkel and Sarkozy had the courage to face facts. They're not out of the woods yet. But perhaps they have learned something from the Icelanders.