The CIW and GDP 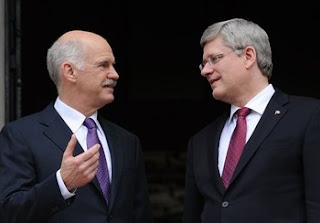 For decades, many economists have noted that GDP is a crude index of a nation's well being. Yesterday, the University of Waterloo introduced a better idea. The Canadian Index of Well Being (CIW) has been in the works since 1994, when a group of academics began tracking data on a number of fronts -- "housing affordability, voter turnout, life expectancy, crime, air quality and income inequality." The result is a much better picture of how Canadians are faring.

The index shows that, despite the Harper government's hype about its superb economic management, the the quality of life Canadians experience is trending down. "This is a seminal report," says Roy Romanow, the chair of the index's advisory board, "because it puts out for the first time some measuring stick as to the actual impact of government policies."

And what, precisely, has been the impact of those policies?

The findings paint a mixed picture. Canadians’ quality of life has diminished in areas such as the environment, leisure and culture, and time use. Health-care advancements have been only modest. And it finds that the top 20 per cent received the lion’s share of rising income and wealth during the boom years while the gap with the bottom 20 per cent grew ever larger.

“What troubles me the most is that, at a time of good economic growth, there are notable disparities, and secondly, that they seem to be widening,” Mr. Romanow said.


We have had lots of anecdotal evidence that life has been getting worse for those who the Occupy Wall Streeters call the "ninety-nine percent." And we know that, over the last thirty years, most of the economic growth in Canada has gone to the wealthiest Canadians. But, at a time when the Harper government steadfastly maintains that what the country needs is more of the same policies, the CIW clearly shows that Stephen Harper is selling snake oil.

Not that the CIW will force the government to change its course. The Conservatives have demonstrated time and again that evidence has no importance for them. But what the new index does show is that the Emperor has no clothes.

And, as people hit the streets -- as they did yesterday in Greece, which Stephen Harper visited six months ago to encourage George Papandreou to do more of the same -- the reasons for the unrest will be abundantly clear.
Posted by Owen Gray at 8:47 am

Email ThisBlogThis!Share to TwitterShare to FacebookShare to Pinterest
Labels: Canadian Index of Well Being

The evidence keeps adding up, Kirby.