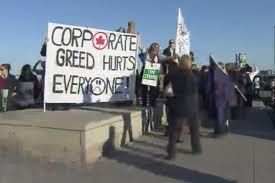 Rod Mickleburgh writes in this morning's Globe and Mail that the Federal Ministry of Labour may soon be a thing of the past. Like the Ministry of the Environment,  one suspects that -- for the Harper government --  both ministries are absolutely superfluous.

Mickleburgh suggests that Lisa Raitt's mandate is to make her ministry disappear. It used to be that the ministry facilitated labour settlements and acted as a referee when necessary. That, writes Mickleburgh, is no longer its mandate:

Ms. Raitt is doing her best to accelerate her portfolio’s demise. The right to free collective bargaining and the right to strike have been fundamental in this country for more than 70 years. With Ms. Raitt in charge, those rights appear headed for the trash can.

Take the postal workers, and don’t say “please.” Not only did the Lisa Raitt government order them back to work (not new), it imposed wages on the union that were actually lower than the employer’s last offer. Something like that hasn’t happened in Canada since the final daze of “Wacky” Bennett’s Social Credit government out here in the early 1970s.

Customer service agents at Air Canada, a private company, also faced back-to-work legislation this year, after only a few days on strike, with few flight disruptions. Why?

And now we have the sad farce of the current wrangle at good old Air Canada, with all sides bumbling around like a bat in a bowling alley.


The Harperites have made it clear from the beginning who they represent. Whether domestically or internationally, they will not be referees. Their job is to take sides. And the side they consistently take is the one with the most money and the most power.

Jim Flaherty said yesterday that the Occupy Wall Street protesters have no quarrel with the Canadian banks, because the banks are tightly regulated. The central thrust of the protests -- rising economic inequality -- was over the little man's head. Being a member of the one percent, he has no conception of how the other ninety-nine percent live.

Ms.Raitt, Mr. Flaherty and Mr. Harper just don't get it. That's why working men and women are in their sights.
Posted by Owen Gray at 8:52 am

Email ThisBlogThis!Share to TwitterShare to FacebookShare to Pinterest
Labels: Conservative Attitude Toward Labour

I hope the anti-union ideological actions of the Harper government arouses the sleeping union movement. They may end up with a real fight on their hands: from wild cat strikes, to general strikes. In the history of the union movement, their has been violence against members to the point of death. Union member have willingly gone to jail. If they get aroused unions may agressively organize and beligerently defy government actions.

I expect the Harper government will try to really weaken the union movement such as Ronald Reagan did in the US when he fired the air traffic controller and made it stick when other unions did not rise up and support them.

Hopefully unions have learned a lesson and solidarity which prevail.

I would not be surprised to see a general strike in the future, Philip.

Having seen what happened in Wisconsin, Canadian unions will probably see the Harper government's actions as a do or die moment.

It will be crucial for unions to garner public support. At this point, there is no predicting how it will all turn out.

Ive been reading your posts on the same topic, Kirby. We're at a watershed moment.