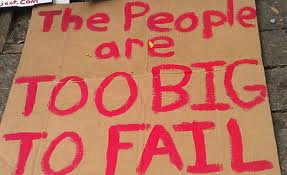 And what it is is increasingly clear. The people who were responsible for the financial crisis of 2008 -- and the growing economic inequality of the last thirty years -- are starting to get scared.

Eric Cantor said last week that "mobs" are now dedicated to "the pitting of Americans against Americans." When Elizabeth Warren repeated what used to be a self evident truth  -- that "there is nobody in this country who got rich on his own," George Will accused her of having a "collectivist agenda;" and the pundits at CNBC proclaimed that the Wall Street protesters were "aligned with Lenin."

Americans have seen this before. Franklin Roosevelt had a term for the people who are presently screaming "class warfare." He called them "economic royalists." The first thing Roosevelt did when he came to office was to reorganize the banking system. This time around, the banks got off unscathed. Paul Krugman writes in this morning's New York Times that:

They have paid no price. Their institutions were bailed out by taxpayers, with few strings attached. They continue to benefit from explicit and implicit federal guarantees — basically, they’re still in a game of heads they win, tails taxpayers lose. And they benefit from tax loopholes that in many cases have people with multimillion-dollar incomes paying lower rates than middle-class families.


This special treatment can’t bear close scrutiny — and therefore, as they see it, there must be no close scrutiny. Anyone who points out the obvious, no matter how calmly and moderately, must be demonized and driven from the stage. In fact, the more reasonable and moderate a critic sounds, the more urgently he or she must be demonized, hence the frantic sliming of Elizabeth Warren.


This time around government looked after the interests of the royalists first. But those royalists have suddenly realized that there are a lot more serfs than lords. And the serfs are insisting that the Masters of Wall Street visit the barber. It's time for a haircut.
Posted by Owen Gray at 8:50 am