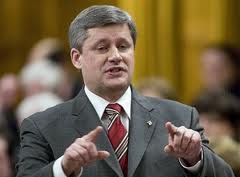 Stephen Harper likes to claim that Conservative values are Canadian values. But, if the two provincial elections which have taken place this week -- and the one which will take place in Ontario tomorrow -- are any indication, Canadians are far from Conservative.

For the moment, they may be conservative -- with a small "c." The country's mood seems to be the same as the one that gave Harper his majority. Canadians are choosing to stay the course and do not wish to make any radical changes. But, on the theory that they know better than voters what's good for them, the Harperites are busy passing all kinds of radical changes -- an omnibus crime bill, the abolition of the Canadian Wheat Board, abolition of political subsidies, etc.

They are in a hurry to change the country before Canadians wise up. But, Chantal Hebert writes in The Toronto Star,  Canadians have cottoned on to Mr. Harper and are checking his drive for power by establishing a strong -- and progressive -- opposition in the provinces.

In Alberta, the Progressive Conservatives have elected a Red Tory as their new leader and Premier. In Quebec, the Bloc Quebecois may have imploded; but the election of a strong NDP caucus illustrates that Quebecers have no intention of abandoning their social democratic roots.

Because fate intervened and the NDP lost Jack Layton, Harper faces a weakened opposition in Ottawa. However, writes Hebert,

Even in profoundly conservative environments such as Alberta, Canada’s progressive streak is alive and well enough to change the rules of a game Harper was expected to dominate unchallenged for the foreseeable future.


The next four years are going to be difficult. No one should view them through rose coloured glasses. But, as the threat of social unrest grows in Europe, and as the Occupy Wall Street protests spread to other American cities, Stephen Harper's vision of a Conservative Canada is beginning to look more and more like a pipe dream. Still, he will try to make that dream a reality.

He would be wise to remember -- and wisdom is not his strong suit -- that he has always been prime minister by default.
Posted by Owen Gray at 9:59 am

From a Quebecer, thus from the outside, looking in, I say Ontario looks like a crap shoot. I'm predicting a minority government either way. Mathematically, I'm predicting vote splits and I believe Nik Nanos on Question Period last Sunday was on the money when he said that the result will depend largely on Andrea Horwath's ONDP vote counts. If her popularity surges, it helps Tim Hudak and he'll squeak through. If not, McGuinty will hang on. That's basically what he said. Ipsos poll aside, I am still predicting a minority for either side. Those homo/transphobic flyers will be a big hit in certain ridings like Brampton and other suburban and rural ridings where trans/homophobia appears to be quite rampant. How many of those people living in the listening area of Newstalk 1010, where they hear the rantings of Ryan Doyle diving for his fainting couch. He's a young dude, but is extremely homophobic and those flyers were the subject of his show recently.

As for Alison Redford in Alberta, apparently, she's getting off to a shaky start. What is this about her cancelling the fall session of the legislature? If true, she's already in hot water. I believe Alberta is slated to go to the polls in a year from now, that really doesn't give her much time to prove herself.

Also, if I'm not mistaken, all 3 candidates for the Alberta PCs were red tories?

Either way, from the comment boards I read, and the Blogging Tories, as well as Alberta newspaper columnists, Alberta is still pretty right winged, which leads me to believe that Alison Redford's win, may well have given Danielle Smith and the Wild Rose Alliance cause to celebrate.

Good news for Manitoba, although, now, watch for the Conservatives in that province to throw in our faces that "most didn't vote for the NDP: they have an 'illegitimate' majority!".

PEI's Liberals and Robert Ghiz didn't have much of an opposition to speak of. That was predictable, really.

Kathy Dunderdale and her PCs look like they'll hold on as will Brad Wall and his Saskatchewan party.

Also, in Quebec, our elections won't be for another year or two, but polls are showing that Francois Legault's center-right fictitious party (which will likely become a real party by the end of the month) would win a majority.

All this to say, that I think Harper has really, by the slow frog cooking method, helped largely in part by luck and timing and certain events (Ie: of course, 9/11), has and still is steering CAnada to this twisted neo-con way by scaring them to death and convincing them that the way to a better, more prosperous Canada is if the rich are taken care of first.

And I really don't believe that the federal NDP seats in Quebec will hold in the next election.

I agree, ck, that the NDP seats in Quebec are not a done deal. Time will tell how durable the party is in la belle province.

And it's true that certain provinces -- like Saskatchewan -- seem to be firmly in Harper's camp.

That said, it seems to me that the dream of a Conservative Canada is based on a wish not on evidence.

And my hunch is that -- as protests in Europe, the United States and Canada take hold -- the earth will shift beneath Stephen's feet.