Charisma Isn't All It's Cracked Up To Be 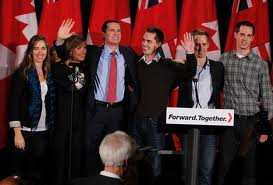 Dalton McGuinty won a third mandate yesterday. Six months ago he was a dead man walking. He will need support from the NDP  to keep him upright. But the truth is that the uncharismatic McGuinty will join Oliver Mowat in the history books as only the second Liberal Premier of Ontario to win three elections. And he did it by using what used to be a Progressive Conservative template: Ontario premiers are bland.

Tom Walkom writes in The Toronto Star that the real progressive conservative has one a third term:

Sometimes the governing party refers to itself as Progressive Conservative. Sometimes it uses the name Liberal. But no matter what it calls itself, the ruling party usually — usually — follows a standard pattern.

It intervenes in the economy to encourage business. It pays some attention to social needs (although it’s rarely accused of over-generosity). It doesn’t rock the boat. And, without being doctrinaire, it prides itself on being a competent manager of the province’s finances.

But even in the rare case where this occurs, the new maverick government comes under intense pressure to fall into line with Ontario’s robustly bland traditions.


When McGuinty took on the Harris conservatives for the first time, they tried to paint him as Norman Bates. The strategy didn't work. Even though McGuinty bore some resemblance to Anthony Perkins, he simply was not scary.

Then they tried to paint him as incompetent. He may have reversed himself more than once on taxes. And there was the E health scandal. But Ontarians knew that, despite his mistakes, he was looking forward. And, most importantly, he wasn't Mike Harris. For the truth is that Mike Harris' ghost still haunts this province, as he now haunts Ottawa. Tim Hudak sounded too much like Mike Harris. Voters did not want to go back there .

Andrea Horvath will push McGuinty to the left. There will be some rejigging of the tax system. But the Green Energy Act will stay in place. And -- because Dalton McGuinty does not use his elbows the way Mike Harris did and Stephen Harper does -- the Liberals have achieved an historic third mandate.

I guess these result are the best a realist can hope for. I wish the NDP had gotten a couple of close contests in the North such as Sudbury. I was pleased to see they got a couple of ridings they have never held before. I am not sure Hudak and McGuinty will be around in 4 years if the election is put off that long. McGuinty lost seats because of the low turnout.

The real loser in this election was Harper. We now know his effort to move the political center in Canada to the right has little support. In PEI, the Conservatives fell flat. In Manitoba, the NDP prevailed. And now Ontario, the Conservatives failed their golden opportunity.
The most interesting event was the new leader of the Conservatives in Alberta. She will be trying to move the PC party to the left and the diehard right wingers will abandon the party for the Wildrose Party. So even in his home province the Conservatives are not with the Harper Agenda. Canada is still a much more progressive country than the Conservative government.

I think you're analysis is quite accurate, Philip. Before the election, Harper said he hoped for a "hat trick" with a Conservative win in Ontario.

Today he said he does not get involved in provincial politics.

That's not true, of course. Jim Flaherty was pushing for Mr. Hudak during the whole campaign.

McGuinty only lacks one seat; but that seat gives the NDP leverage.