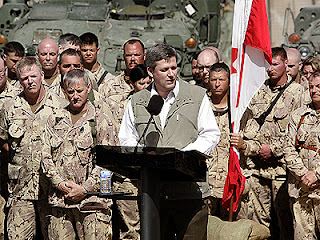 Lawrence Martin's review of Murray Brewster's book, The Savage War, illustrates yet again Von Clausewitz's observation that war is "policy by other means." Canada got into Afghanistan because the Martin government wanted to appease the United States for not being stupid enough to invade Iraq.

For the Harper Conservatives, the war offered a splendid opportunity to establish its brand as "the party of patriotism." The war was fought for domestic consumption, not to advance the cause of world peace:

In other words, if the Harper Conservatives knew the history of Afghanistan, they hadn’t learned much from it. Their political heart was set on military glory. “The Liberals had medicare and the CPP,” an insider tells Mr. Brewster. “We chose the military.” For Prime Minister Stephen Harper, it was “ideological,” another insider says. It was damn the torpedoes, full speed ahead. There’d be no cutting and running.

And when the war began to go badly, the government began to sell the war as a humanitarian mission. The problem was that Canada was not delivering what Afghans wanted -- "things such as schools, polio vaccinations, women’s rights, toys for boys and girls." Instead, Brewster writes,

When you drilled down into the numbers, you saw that almost everything we were doing for them was tailored to our tastes.” Issues such as education and health care were “easily understandable to people back home and, most important, politically sellable to a public that had already turned away from the war in droves.


None of this is surprising. Harper's foreign policy has always been about harvesting votes at home, not making a contribution to the international community. For Stephen Harper, the Afghan War was all politics all the time.

As for patriotism, the history of Canada's involvement in Afghanistan has once again proved that Samuel Johnson was right:  Patriotism is the last refuge of not just one scoundrel, but many.
Posted by Owen Gray at 8:19 am

Email ThisBlogThis!Share to TwitterShare to FacebookShare to Pinterest
Labels: Canada in Afghanistan

Wait a minute, didn't Chretien get us into Afghanistan?

You are so right. I am anticipating the Conservatives over the top exploitation of the 200th anniversary of the War of 1812.

I watched the documentary just broadcast on PBS It is a good clear explanation. You can view it online. http://video.pbs.org/video/2089393539 The journal by William Atherton I located and read on the Internet Archive. Atherton is the US soldier featured in the program.

You're right, ck. When Chretien was Prime Minister -- in 2001 -- the Liberals sent 2,000 troops to Afghanistan. But they were in the process of withdrawing the troops by 2004.

In 2005, NATO asked for more troops and the Martin government agreed to up the Canadian ante.

As with the termination of terror legislation, the Chretien Liberals were winding down Canada's commitment to Afghanistan.

Martin's government took things in the opposite direction.

Jeffrey Simpson wrote a column recently, Philip, in which he claimed that the War of 1812 was really a stupid war.

It featured, he wrote, "largely bad military leadership, vague objectives, scattered and messy battles and, critically, sizable elements on both sides of the Canadian-U.S. border that wanted the other side to win."

Now the Harper government wants to glorify that mistake:

"Commemorating this war, then, risks turning it into an exercise not of accurate historical account but of contemporary nationalistic propaganda. To this danger can be added the Harper government’s relentless attempt to appropriate and invent symbols of Canadian pride, and to associate itself with them, fresh witness to which is the setting aside of nearly $12-million over the next three years for an 1812 Commemoration Fund."

All in all, it's the work of scoundrels.