The Answers Are All Behind Them 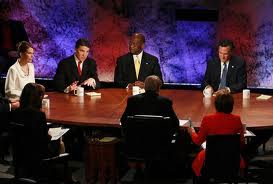 Ezra Klein, in his analysis of last night's Republican Candidates debate, writes: "The candidates vying for the GOP’s 2012 presidential nomination want to force history backward." If there is one thing all of them want to do, it is to repeal everything the Obama Administration has done -- and then go much further than that:

Their proposals to roll back the growth and complexity of the state did not stop with the financial sector. Former Utah governor Jon Huntsman promoted his plan to “clean all of the loopholes and the deductions” out of the tax code, which would mean removing the mortgage-interest deduction and the exclusion for employer-based health care, just for starters.

Cain scoffed at such incrementalism. His 9-9-9 plan, he said, “starts with throwing out the current tax code,” and then replaces it with a 9 percent sales tax, a 9 percent income tax and a 9 percent corporate tax.

Paul was not impressed. “What I hear here is just tinkering with the current system and not looking at something new and different,” he said, going on to suggest “a free-market economy without a Federal Reserve system.” That would be new and different.


Like petulant children intent on banishing adults from their world, the Republicans see one cause for all of the country's problems -- too much government. Not one of them will consider the possibility that those problems are the result of past Republican attempts to eviscerate government. And not one of them considers the consequences of what they propose. Klein writes that:

If every idea uttered around moderator Charlie Rose’s table was made into law tomorrow, the financial-regulation bill would be gone, as would health-care reform and the Federal Reserve. The tax credits that support the housing market would vanish, and so too would Fannie Mae and Freddie Mac, the government-backed housing giants that guarantee the majority of new loans. There would be a balanced-budget amendment to the Constitution, which would require more than $1 trillion in spending cuts if it was to be satisfied in 2013, and China would be branded a currency manipulator.

This entry is cross posted at The Moderate Voice.
Posted by Owen Gray at 9:56 am