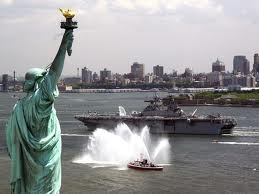 I have long felt that modern conservatives lack a sense of irony. I can think of no credible explanation for this impediment. Perhaps it is genetic. But, as Paul Krugman points out in Monday's New York Times, whether they're aware of it or not, their irony is showing.

Krugman credits Barney Frank with a phrase which accurately describes them -- "weaponized Keynesians."

Right now the weaponized Keynesians are out in full force — which makes this a good time to see what’s really going on in debates over economic policy.

What’s bringing out the military big spenders is the approaching deadline for the so-called supercommittee to agree on a plan for deficit reduction. If no agreement is reached, this failure is supposed to trigger cuts in the defense budget.


What is truly fascinating is that the modern Republican Party, which holds that government spending is wasteful spending, is wholeheartedly in favour of spending for the military. Never mind that one of their own  -- Dwight Eisenhower -- warned Americans of the danger of the military-industrial complex.

Why favour spending on guns and bombs rather than roads and bridges? Krugman  writes that the answer lies in "a point made long ago by the Polish economist Michael Kalecki: to admit that the government can create jobs is to reduce the perceived importance of business confidence."

If Republicans possessed a sense of irony, they would see the hypocrisy behind their position. But to compensate for that lack of irony, they have doubled down on outrage.

This entry is cross posted at The Moderate Voice.
Posted by Owen Gray at 9:41 am