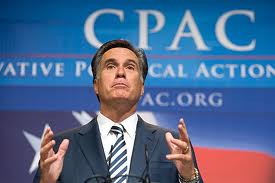 Mitt Romney's pursuit of the Republican presidential nomination has cost him a great deal -- a great deal of money, a great deal of time, and a great deal of integrity. At the last candidates' debate in Nevada, he was in everybody's sights. His health care plan -- which served as the model for Obamcare -- was pilloried.  Mitt walked away from it.

He once favoured abortion. Now he condemns it. And, as Paul Krugman reports in Friday's New York Times, even though he once stood for environmental regulation, he now demands that those regulations be loosened.

Romney is simply getting in step with his party. Republicans are citing a study from the American Petroleum Institute which claims that removing restrictions on oil and gas extraction will create jobs:

If you take the study’s claims at face value, it offers little reason to believe that dirtier air and water can solve our current employment crisis. All the big numbers in the report are projections for late this decade. The report predicts fewer than 200,000 jobs next year, and fewer than 700,000 even by 2015.
You might want to compare these numbers with a couple of other numbers: the 14 million Americans currently unemployed, and the one million to two million jobs that independent estimates suggest the Obama plan would create, not in the distant future, but in 2012.


None of this is surprising. Republicans have been in the pocket of the energy lobby for a long time. What is surprising is Romney's about face on the issue. When he was governor of Massachusetts, he supported environmental controls on coal fired power plants. “I will not create jobs or hold jobs that kill people," he said.

During the last election cycle, John McCain waved the flag of Republican orthodoxy and saved his Senate seat. Perhaps Romney believes he's saving a spot for himself in the Oval Office. But, by trying to appease the Republican base, he has become a modern Sysiphus -- the personification of futility.

The Republican line up for Presidential nomination is a pathetic lot. Some are even dangerous and would see the US invading Iran, even though it is larger and better equipped militarily that Iraq. (Do they never learn?) Obama, in spite of being a disappointment to many should win the next election by default. I should hope so. What ever happened to intelligent progressive Republicans? I knew the Republican Elliot Richardson, and a more honourable and intelligent person you would never find. He should have become President. As you may recall he resigned rather than fire the special prosecutor Cox on Nixon's order. A ask again, where are there Republican of this stature?

The Republican Party has purged itself of people like Elliot Richardson, Philip.

It's a party with a noble heritage. Unfortunately, it has nothing -- and no one -- noble to offer today.

No, I'd say they've been hijacked by the tea-party.

Meanwhile, looks like Obama may well jump on the Occupy Wall Street band wagon, to help him with his 2012 election campaign.

They're certainly doing everything they can to make sure Obama isn't re-elected, ck.

The Tea Party seems to be a 21st Century version of the "know nothings."

Romney strikes me as smarter than that. But it's sad to see him cow tow to the willfully ignorant.