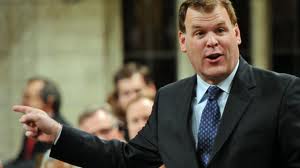 Lawrence Martin writes, in today's Globe and Mail, that:

If you were picking the most valuable player on Prime Minister Stephen Harper’s front bench, you wouldn’t be far off in pointing to John Baird, the Foreign Affairs Minister.


Baird, writes Martin, is "the dean of damage control, the team's most artful dodger."  It is really quite remarkable that Stephen Harper has seen fit to promote Baird to the position which is second only to the prime minister himself. Baird's  appointment is the equivalent of Mike Harris promoting John Snoblen -- a high school drop out -- to the post of Minister of Education.

It says everything you need to know about Stephen Harper's foreign policy. In the Harper government, the Minister of Foreign Affairs is a clown prince -- whose assigned task is to erase Mike Pearson's legacy. That became absolutely clear last week when Baird let it be known that the address on his business card was no longer the "Lester B. Pearson Building."

But a dedicated press and opposition may be able to put an end to Mr. Baird's progress. Martin writes that:

with Clementgate, the opportunity may be at hand. A $50-million political slush fund should be no laughing matter, not even for Mr. Baird. And as Treasury Board president during the time in question, Mr. Baird was the one who gave the green light to Mr. Clement to shower his Muskoka riding with taxpayer money slated to be used for border infrastructure projects.


If Tony Clement goes down, Baird could be next. As Martin points out, Harper is protecting Clement so he can protect Baird.

It says a great deal about Stephen Harper that he holds both men in such high regard. Unfortunately, the country -- domestically and internationally -- is suffering from the prime minister's lousy judgement.

You assume enough Canadians give a shit about $50 million slush funds.

Canadians don't care about our soldiers dying for a government of rapist thieves.

Canadians resent it hugely if you ask them to vote more than once every half-decade.

Clement and Baird are around for the next four years.

Unless the economy totally implodes and the Tim Horton's crowd starts to get desperately angry.

I could be wrong, of course. But it seems to me that public anger is beginning to move toward a critical mass.

It will start in Europe and move to the United States. When Canadians understand that Harper has advocated the same policies which have led to years of stagnation, they will turn on him and his ministers.

Mike Harris got out before the roof caved in. I suspect that certain "bright lights" in the Harper government will do the same.