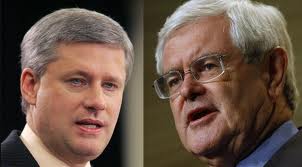 Susan Delacourt writes this morning that when the Liberals made budget cuts in 1995, they sold their program by using fear -- fear that we were about to hit a debt wall, fear that our children would be left to clean up the mess we had made. Now, she writes, the Harper government is whipping up public anger:


Now, 17 years later, I'm intrigued by how fear has been largely replaced by anger. When we cast around looking for where the cuts are coming, we look at where the government and its allies have been  trying to whip  up scorn and  rage: the CBC, the public service, generous pensions, unions, provinces, (certain) foreigners, and pretty much anyone who is seen to be standing in the way of Conservative dreams of prosperity.


The same scenario is being played out south of the border by Newt Gingrich. He gives voice to angry white men who like to think that they are undeprivileged. But its clear that the money which backs Gingrich does not come from Mom and Pop. The privileged -- particularly Sheldon Adelson -- are intent on keeping their privileges.

And so it is with Stephen Harper. He speaks for -- and whips up the anger of -- those who have benefited from the very policies which almost sent us over the cliff in 2008. When he speaks of "transformation," he speaks for more of the same -- the concentration of wealth and power in fewer and fewer hands. Anyone who opposes his vision is "an enemy of Canada."

It's interesting -- this is something that probably couldn't work in the private sector. (And probably shouldn't.) When downsizing cuts are made  in this realm, our bosses have to go to some lengths to prove that the job losses weren't the result of a grudge or personal antipathy. Funny how when it comes to government, or at least this government, we simply assume that those being cut are going to get cut down first in the eyes of the public.


Harper, like Gingrich, is a demagogue. Bob Rae is right. They deserve each other.

Email ThisBlogThis!Share to TwitterShare to FacebookShare to Pinterest
Labels: Harper and Gingrich

I look at that guy's picture and he shrinks with each passing day.

A mental mediocrity, wedded to a failing philosophy, bringing about policies that appear designed to fail.

What does he hope to really get out of it at the end of it all?

He must really believe his own drivel. Somehow he isn't as stupid as Jim Flaherty, John Baird or Tony Clemet, but he's down there.

Is there a generational difference here? Hatred of unions, boomers, and many other things abounds, perhaps catering to a sense of frustrated entitlement. Whatever it is, politicians are using it, whether or not they have created it.

Certainly there has to be some sense of generational difference, Chris. I see it in the differences between our two older sons and our youngest son.

The world began to change in the 1980's. Stephen Harper entered university just as Maggie Thatcher and Ronald Reagan strode upon the world stage.

I entered university two years after President Kennedy was assassinated; and I graduated one year after Trudeau became prime minister.

Stephen Harper's influences were much different than mine -- and, I suspect, yours.

Harper's economic education serves as a kind of theology, thwap. And because it has assumed the place of a religion, he is immune to facts.

Harper has many flaws. But one of the most glaring is his tendency to confuse economics and theology.