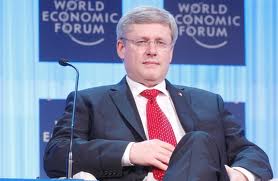 The cuts Stephen Harper wants to make to Old Age Security are driven by ideology, not necessity. Consider the Public Appointments Commission and the Employment Insurance Financing Board. Both departments were set up by the Conservatives. And, although both agencies are on record as having nothing to do, the government intends to keep them going.

Neither agency has been part of the government's review of spending. Yet Harper claims that -- while such zombie departments can be tolerated -- the Old Age Security program is "unsustainable." That claim, Tom Walkom writes in the Toronto Star, is pure Harperian balderdash:

True, the government predicts that the cost of pensions for the elderly, now about $35.6 billion, will triple by 2030. That sounds dire. In fact it means that the pension bill will grow by about 5.6 per cent a year during the period.

And when baby boomers start to die off, as they will from about 2020, spending on the elderly will start to decelerate on its own.


Harper claims that he is merely saving Canada from the kinds of problems which Europe is facing. But his diagnosis of the cause of those problems -- an out of control welfare state -- is simply wrong. Walkom writes:

In fact, the European debt crisis is far more complex. Spain and Ireland, which do not offer generous social programs, are in trouble. Germany, which does, is not.

Arguably, the real root cause of the crisis was the decision by countries with vastly different economies to use a common currency, the euro — a decision that encouraged too much public and private borrowing during the good times and makes repayment now near impossible.


The truth is that Stephen Harper will cut what he doesn't like -- not what doesn't work. The man who insists he's the smartest guy in the room is really not a very bright fellow. Still,  he has proved in the past that he has a talent for seizing expediency.

Two things that has not been addressed in any country that has either hiked the retirement age or thinking about it is .

1) while the new talking point is that people are living longer, they're not addressing certain realities about older people. On the whole, they may be living longer, but many, many more are sick, many of them chronically so by the time they hit 60. Many of whom do have conditions like Alzeimers and dementia. They're not healthy enough to work.

2)Ageism is alive and well in the work force in pretty much all industries. Heck, many don't want to hire anyone over 40! I know. I lived through it.

Companies are closing down and/or relocating their operations elsewhere in the world, seeing many older workers who did the same job for the same employer for 15-20-even 30 years getting let go. Employers are not rushing to hire them.

Remember the French debates before the last election? Who became the unsung heroine or symbol of those debates? Not a young college grad, but an unemployed 55 year old woman from a small rural town in La Mauricie region. How we have forgotten so quickly about Mme Paille!

How would hiking the retirement age solve any problems if ageism on the work force isn't addressed?

The strange thing, ck, is that a lot of Harper's support comes from seniors.

If he thinks that changing Old Age Security is going to win votes from the same people who voted for him, he hasn't been paying attention.

Perhaps he feels that -- with a majority -- he doesn't have to pay attention.

Question is will seniors continue to vote against their interests? Why not, the working class often do, over and over again.

It's simple, left of center parties are perceived to be too "elite" and educated for them and thus, incapable of monosyllabic words or slogans that fit on bumper stickers.

More important reason why they continue to vote against their interests, well, this recent article in The Guardian explains it perfectly. They were talking more of British Tories and Republicans, but the article describes Harper and his tradictions and 'patriotic' symbols as well.

Thanks for the link, ck. Freedland is right. It's an old magician's trick: Create a diversion while you accomplish what you want to accomplish.

It works when people are too stupid to pay attention. The question is: Are Canadians paying attention?