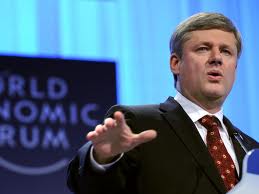 On the same day that the Globe and Mail reported on Stephen Harper's "grand plan to reshape Canada," and on Tony Clement's announcement that the "budget axe could cut deeper, sooner," Jeffrey Simpson wrote that,  "In the first five years of the Harper government, the number of information officers in the federal government grew by 16 per cent, to 4,459 from 3,855."

The growth in the number of information officers is curious. For the Harper government has been all about releasing less information, not more of it. The truth is that the Conservatives are obsessed with information -- or more specifically, the control of information. Simpson writes:

Everyone with even the slightest acquaintance of this government knows of its mania for information control. Although information officers have grown in number throughout the government, all messaging (down to the finest details) is controlled in the Prime Minister’s Office and the Privy Council Office, where, predictably, the number of people working on information has also grown.


Despite their emphasis on information control, however, the Harperites got their signals crossed. While Clement ensured his audience that neither Canada Pension nor Old Age Security payments would be cut, Harper was telling his audience in Davos that Old Age Security was unsustainable. This is still the gang that can't shoot straight.

This is the government which says it is dedicated to small government, while it adds non functioning departments .Greg Weston reports this morning on yet another Conservative initiated agency which has nothing to do.  One might get the impression that the prime minister doesn't know what he's talking about.

Nevertheless, at the World Economics Forum, Harper lectured European governments on their penchant for initiating services for which they refuse to pay. Strangely enough, the Europeans aren't buying what our prime minister says. They know what every Canadian should know by now:  Stephen Harper is full of himself.

Email ThisBlogThis!Share to TwitterShare to FacebookShare to Pinterest
Labels: Harper in Davos