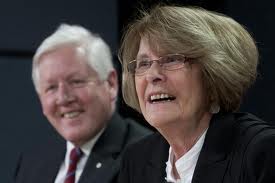 The New Democrats are understandably furious at Lise St. Denis. But, as Chantal Hebert points out, her decision was hardly self serving:

Lise St-Denis could easily have continued to collect her pay as the MP for Saint-Maurice—Champlain on the NDP benches for the foreseeable future. Battling cancer at 71, the retired teacher could have bided her time before quietly going home. That would have been the path of least resistance.


The truth is that -- having been abandoned by the Conservatives, mortified by the Liberals and isolated by the Bloc Quebecois -- Quebecers parked their votes with the New Democrats in the last election. True, Quebec politics have been left of center for a long time; and the NDP platform was a good fit. But more than anything else, Quebecers voted for Jack Layton.

Many Canadians had forgotten -- or simply did not know -- that, despite all his time on Toronto City Council, Jack Layton was a native son, who moved as effortlessly between French and English as Pierre Trudeau and Brian Mulroney did before him.

On top of all that, St. Denis occupies Jean Chretien's old seat, which the old fox occupied -- except for a brief hiatus -- for nearly forty years. If she has had her ear to the ground, she knows that her constituents are not rock solid Dippers.

It's beginning to look like the Liberals and the New Democrats are preparing for an ugly battle in Quebec. That would be a mistake for both parties. Hebert correctly notes that:


The problem is that precious few Quebecers signed up for a fight to the finish between the Liberals and the NDP or for a left-wing crusade last May. More than a third of the party’s 2011 supporters voted for Jean Chrétien in 2000. A significant number are poised to vote for the new right-of-centre Coalition Avenir Québec in the next provincial election.

It was Layton’s ecumenical approach to politics that drew so many Quebec voters to the NDP. Based on his 2008 advocacy of a governing arrangement with the Liberals, he seemed best placed to reach out of the partisan box and build a progressive coalition sturdy enough to take on the Conservatives.


The next time around, both parties would do well to follow Nathan Cullen's advice and form a strategic alliance. The Harper Conservatives will  -- you'll excuse the pun -- turn blue. But they will not be able to claim that the opposition is a "separatist coalition."

In the end, it will take such a coalition to stop the Conservative juggernaut.

That's why according to the montreal gazette the people in her riding are pissed?

As for what advantage did she gain, its called envelops filled with cash, plus a critic role, you know the liberal party way, she's never going to run again so there will never be a chance for the people she defrauded to have thier say.
If your so certain that the people in her riding agree with her on this, let her run in a bielection, prove that she has the support you say she does. Its what she ran on, its what she voted to so in the house. If you and Chantal are right she should win easily. Could it be the liberals aren't so sure? It doesn't help she disrepected Jack in process which has upset Quebecers.

Ask yourself why the NDP is so confident in wanting a bielection, even though if she won she'd have legitamancy. Its because they know they'd lose the seat.

I think it would take two powerful leaders able to overcome their respective membership's distrust of the other. The NDP, following their second place victory, didn't come to the Libs with an olive branch, much less milk and honey. To the contrary they were more apt to call for capitulation. The Libs are quite right to wonder what lies in store for the post-Layton NDP. It's going to take at least one more election before both sides get their footing.

I agree, Mound. Any talk of a merger is premature. There is a lot of history behind these two parties.

The New Democrats don't trust the Liberals; and the reason Bob Rae was not chosen as leader the first time around -- his record aside -- was that he had been a New Democrat.

But, if the 60% who didn't chose Harper are to have any leverage, both parties are going to have to come to some kind of strategic arrangement.

I understand why her electors are peeved, Gyor -- just as David Emerson's constituents were peeved when he changed sides.

I doubt that St. Denis will be given the kind of reward that Emerson got.

On the other hand, Quebecers' expectations from the New Democrats -- unrealistic as they may have been -- have not been met.

The results of a by election could be very interesting.

St. Denis has made a hollow jesture. It is hard to understand, she new the New Democratic Party well for she had been an active supporter for many years. I will always be suspicious that there was Liberal raiding going on here.

Given the fact that this is Jean Chretien's old riding, Philip, your suspicions may be well founded.

Certainly her move does not serve her long term interests. That said, as long as the NDP and the Liberals battle each other tooth and nail, Mr. Harper will remain in the driver's seat.

He couldn't ask for a better outcome.

I don't think there's really anything of significance with Lise St-Denis's floor crossing. In fact, I find that NDP partisans getting all hot and bothered and Liberal partisans getting all ga ga giddy over the whole thing rather amusing; entertaining. And that's what it is, you know, nothing more.

Before I go on, I'd just like to say that those demanding that floor crossings should be banned, I'd like to ask what they thought of Francoise Boisvert when she moved from the Liberals to the NDP? Ok, she wasn't a sitting MP at the time, but one gets the idea.

Also, what about Scott Brison moving to the Liberals from the old Progressive Conservatives just before the merger? I remember the Conservatives, shortly after the merger, treating him as a traitor and saying "he wasn't being true to himself", when, according to Martin's "Harperland", his floor crossing was all about being "true to himself"--Harper, in a pre-merger meeting with Brison told him in no uncertain terms that the fact that Brison was openly gay would be a problem for the socially conservative base. Hello, not so hidden agenda and proof of conservative homophobia, anyone?

And what about Belinda Stronach, who felt that women were not being treated properly under the Harper Conservatives?

Sure, I deplore what David Emerson did, but in his case, the ink was barely dry on the Election results of 2006 and parliament hadn't even started sitting and Emerson didn't appear to have serious personal or ideological differences with Paul Martin or the Liberals.

I'm just saying it should probably be a case by case.

At least, MMe St-Denis sat as an NDP MP for several months before crossing the floor. This appears to be more for personal reasons in her case. This is more reminiscent of the Robert Toupin floor crossing of 1986, when he moved from the Mulroney Progressive Conservatives to the NDP becoming Quebec's first NDP MP in history.

Toupin didn't stick around long. Neither will Mme St-Denis. As pointed out, she is 71 and will be 74 come the next election, plus she is in poor health--she has cancer. The likelihood of her running in the next election are pretty slim to begin with whether she stayed with the NDP, joined the Liberals or the Purple Polka Dot eating party. I say leave her alone.

Honestly, I don't think the folks of St-Maurice really care one way or the other, for the most part. Some may have their temper tantrum. They'll get over it and they'll vote accordingly the next election if they don't.

After Chretien left, the riding went Bloc and stayed that way until May 2. I presume that it will go back to the Bloc the next election.

In fact, under Daniel Paille, who is a strong leader, the Bloc will make a come back in La belle province in the next election.

It's time to face facts Liberals and NDPers:

1) On May 2, Quebeces didn't vote NDP, they voted for "Le Bon Jack". Jackmania, much like Trudeaumania of the late 60s. Jack Layton is gone now.

2) The Liberals will never make a come back in this province. Sure, they may pick up the traditional federalist ridings they once held but lost to the NDP, and maybe a few swing ridings where there are many federalists like in the Eastern Townships, but no more.

Another thing both parties should warm up to that everyone is ignoring. Harper just passed or is about to pass that bill that will give many more seats to Ontario, Alberta and BC. No doubt Harper will play those gerrymandering games and the new electoral map in those provinces will be redrawn to ensure Conservative victories. Even more so if the Liberals and NDP continue to split the vote. Another good reason for the two to start cooperating with each other on some level, if not a merger. They should also stop fighting over Quebec and start concentrating their energies in ONtario, Alberta and BC, where the new gerrymandered additional ridings will be.

Your analysis is spot on, ck. I don't think Mme. St. Denis' move to the Liberals signals anything -- except, perhaps, that the NDP hold on the province's seats is not a done deal.

Those who see tectonic shifts in the electoral landscape are dreaming in Technicolor. A shift may come. But it hasn't happened yet.

And, to make sure that it doesn't happen, the Liberals and the NDP are going to have to reach some kind of entente.