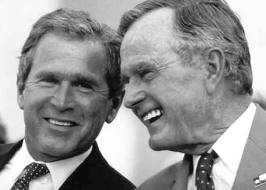 In his song,The Boxer, Paul Simon sang, "A man hears what he wants to hear, and disregards the rest." Frank Bruni points out, in this morning's New York Times, that this human frailty is particularly true of the Bushes -- father and son -- and the place they hold in the present Republican narrative:  In the case of Bush the Younger, Bruni writes that:

You’d think Ronald Reagan, who is invoked incessantly, was the last Republican president, and you’d think he was not only a flawless chief executive but a sinless adherent to current Republican dogma.


The eight years when the last Republican president occupied the White House have gone down the memory hole. That loss of memory is quite purposeful:

[The] debt has indeed risen at a terrifying pace over the last three years, but for reasons that have a great deal to do with ... George W. Bush. The perpetuation of his tax cuts, the continuation of his new prescription drug benefit, the management of his wars and the interest payments on debt that he accumulated account for a crucial share of the additional sum Obama has amassed. And while the details of Obama’s stimulus spending and bailouts can and should be seriously questioned, the need for action stemmed largely from a severe economic downturn that began under 43.


Even more interesting is how Bush the Elder has been air brushed from the Republican pitch. His fiscal record is the exact opposite of his son's:

FOR real, brave fiscal responsibility, Republicans should refer to and lionize the 41st president, the other George Bush. Much of his record, including his decision to exit Iraq after removing Saddam Hussein from Kuwait, shimmers in retrospect.

At great political cost, he allowed a tax increase appropriate to the fiscal circumstances. More than a few economists believe that it set the stage for the boom of the Clinton years. But 41’s budgetary approach is less likely to draw attention from present-day Republicans than 43’s. It runs counter to the party’s anti-tax obsessions. It’s anathema.


Instead, to the uninformed it appears that the last Republican president was Ronald Reagan. But, even in his case, Republican memory is highly selective:

As one prominent party strategist laughingly reminded me this week, Reagan allowed a dozen tax increases by some counts and measures; put Sandra Day O’Connor, an eventual disappointment to conservatives, on the Supreme Court; and signed the Simpson-Mazzoli immigration reform act, which gave amnesty to three million illegal immigrants. The liberal in Obama must be green with envy.


The truth is that neither the Bushes nor Reagan fit the present narrative. Republicans are cherry picking evidence to fit their thesis. It may work as an advertising ploy. But it's disconnected from reality and the truth.

This entry is cross posted at The Moderate Voice.
Posted by Owen Gray at 9:05 am

Can they possibly me more contemptible?

They want to force us to eat a toxic stew of bigotry and ignorance and they refer to the past achievements of a completely imaginary history to justify it.