About Those Capital Gains Taxes 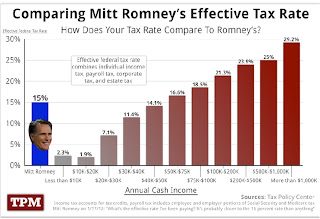 Mitt Romney has so far refused to release information on his taxes. There is a good reason why he hasn't. If those documents see the light of day, it will become immediately apparent that Romney is a poster child for precisely what is wrong with the American economy.

Paul Krugman writes that you don't have to go back thirty years to see what has happened. The last twenty years provides plenty of evidence to support the notion that the game is rigged:

Since 1992, the I.R.S. has been releasing income and tax data for the 400 highest-income filers. In 2008, the most recent year available, these filers paid only 18.1 percent of their income in federal income taxes; in 2007, they paid only 16.6 percent. When you bear in mind that the rich pay little either in payroll taxes or in state and local taxes — major burdens on middle-class families — this implies that the top 400 filers faced lower taxes than many ordinary workers.

The main reason the rich pay so little is that most of their income takes the form of capital gains, which are taxed at a maximum rate of 15 percent, far below the maximum on wages and salaries. So the question is whether capital gains — three-quarters of which go to the top 1 percent of the income distribution — warrant such special treatment.


The problem with such special treatment is that it acts like a vacuum cleaner, sucking all the wealth to the top of the economic pyramid.  The bottom eventually collapses, bringing down the whole house of cards -- and leaving in its wake the Great Depression and the Great Recession.

Some argue that special treatment of capital gains creates jobs. The argument that Romney's Republican opponents are making is that it destroys jobs, while creating profits for investors. But they can't have it both ways. And that is the bind they are in.

The shift of the US tax burden from the rentier class to wage earners was powerfully advanced by Bush/Cheney. Few Americans realized it but they've been living with class warfare since the Reagan years and they've been on the receiving end. The result has been a massive, legislation-powered, transfer of wealth out of the blue and white-collar wage earning classes into the investor class.

This also facilitated a transformation of America's economy as the country's manufacturing base (the beating heart of its middle class) was shipped offshore and a FIRE (finance,insurance,real estate) economy grew in its place.
Why invest in factories to earn a modest return when you can rake in several times that on the markets.

Reagan's legacy is that he betrayed his country, sapped its resilience and, eventually, brought it low. He paved the way for what has today become a true corporatocracy and a permanent warfare state. And we have watched it happen, stage by stage, often without recognizing what we were seeing transpire.

Absolutely true, Mound. And it was done while Reagan and his acolytes attacked the very elites they served.

Possibly just hearsay, but I've read that Romney funded the anti-gay marriage proposition in California to the tune of $4million. That wouldn't look so good either - although the Republican base would like it.

After yesterday's South Carolina primary, Chris, I suspect that Mitt is thinking about other things.

Newt Gingrich refuses to go away. Who says it doesn't pay to be a demagogue?