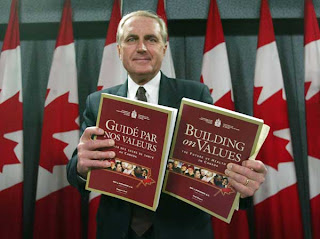 Roy Romanow and his associates have penned a must read rebuttal to the Conservative government's new vision of healthcare. In today's Globe and Mail, they write:

Successful nations are built on unifying infrastructure. Think railways and the Trans-Canada Highway, seamless telecommunications networks, the armed forces, regulatory and judicial processes. Health care is a level up in importance because health is a fundamental precondition for full participation in society.


The last part of the last sentence bears repeating -- health is a fundamental precondition for full participation in society. It should be obvious by now that Conservative success depends on decreasing citizen participation. In every federal election in which Stephen Harper has run, voter participation has shrunk. The fewer citizens who vote, the more Stephen Harper will succeed. The Conservatives know this; and they work hard to make it so.

But Romanow and his confreres point to what should be another obvious fact -- Harper and Company, all claims to the contrary, are economically dense. Romanow and his associates insist that, "A high performing nationwide public health system contributes enormously to the economy."

Businesses don’t have to design and fund complex health plans for their employees. Workers don’t have to worry that taking a job in another province will compromise their health care. Only leadership from Ottawa can guarantee a common set of programs and standards and ensure that program enhancements are available to all Canadians.


Now Mr. Harper proposes to wash his hands of medicare and simply write cheques. In his six years as prime minister, he has never held a first ministers conference. There are some who hail this "executive federalism" as the wave of the future. The truth is that a meeting would mean that Mr. Harper would have to face his opposition; and -- as he has proven in the past  -- he would rather prorogue it than face it.

Perhaps that's because opposition rebuttals show up the prime minister for the shallow, shrivelled leader he is.

Email ThisBlogThis!Share to TwitterShare to FacebookShare to Pinterest
Labels: The Healthcare Debate