Labour In The Crosshairs 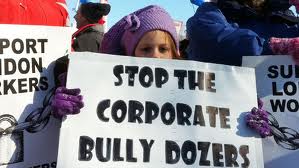 The day before thousands of people gathered in London to support Electro-Motive's locked out workers, Jim Stanford wrote in the Globe and Mail that labour is facing a brave new world:

In the current bargaining environment, companies (especially multinational firms) hold the best cards. And executives are increasingly willing to precipitate their own work stoppages – through management lockouts – to enforce demands for lower wages and benefits.


A recession -- particularly this one -- always puts management in the catbird seat. High unemployment gives workers few options.  That's where government could play a crucial role. In 1935 -- in the middle of the Great Depression -- the Roosevelt administration passed the Wagner Act, which gave workers something they had never had before -- the right to organize. It also set up the National Labour Relations Board to act as a mediator in labour disputes.

The Harper government, of course, has gone in exactly the opposite direction -- as  its response to both the Canada Post and Air Canada strikes makes crystal clear. And it has been absolutely silent about the situation at Electro-Motive. Selling oil is on its radar. Canadian manufacturing jobs aren't.

There is a clear agenda behind the government's response. And the results, writes Stanford, will not be good for the Canadian economy:

This trend is troubling, for macroeconomic as well as ethical reasons. As employers ratchet down compensation, income shifts from consumers (who spend every penny) to corporations (which sit on a growing pile of uninvested cash). That undermines aggregate spending and weakens the recovery. And the more employers succeed in driving down wages, the greater the danger of setting off a cycle of deflation in wages and prices (such as the one that bedevilled Japan for a decade).


The prime minister claims to be an economist. But that claim -- like so may of the other things he has said -- does not stand up to scrutiny.

Email ThisBlogThis!Share to TwitterShare to FacebookShare to Pinterest
Labels: The Electro-Motive Strike

Yep. Elites and their lick-spittles (like harper) are digging their own mass grave and they're bragging and thinking that they're geniuses while they do it.

The strange part is that they haven't figured that out yet, thwap.

They all think alike in the Harper party.

Money speaks for money. Harper is indeed an economist but economics is an ideology as much as a so-called science. Harper's ideology has little or no concern with the wealth of the nation, only the wealth of the rich of the nation. He and his cronies truly believe, I think, that they can apply a third-world model to Canada in which the rich get richer and to hell with the rest.

And the model works as long as you can control the media effectively and gradually destroy the education system. Fewer and fewer people will vote and the ones who do will be the fascist dregs of society.

It's true, Kirby, that Harper has been schooled in Milton Friedman's worldview -- and he will succeed in turning us into a banana republic, if we let him.

The question is, "Are we going to let him get away with it?"