Working For The Man 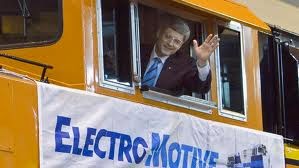 Back in October, when 6,800 Air Canada workers rejected a second offer from Air Canada, the Harper government intervened immediately, claiming that the strike endangered the Canadian economy. Air Canada is a private corporation. But the Conservatives claimed that, because transportation fell under federal jurisdiction, they had to intervene.

When 420 workers at Electro-Motive Canada were locked out by their employer five days ago -- and were told to take or leave a 55% pay cut -- the Harper government remained silent. Such was not the case in 2008, when Stephen Harper appeared at the plant to announce $5 million in tax breaks to locomotive buyers and another $1 million in tax breaks for capital investment in the company.

Electro-Motive is a private company also involved in transportation. But it's owned by Caterpillar. And therein lies the difference. During the last election, Mr. Harper claimed that he was working for Canadians. The Electro-Motive strike and the Air Canada strike prove that Harper is working for the man -- or men -- who, according to Hugh Mackenzie's report for the Canadian Centre for Policy Alternatives, earned as much in the first three days of this year as the average Canadian earns in a year.

And he sees nothing wrong with the workers at Electro-Motive earning 55%  less this year. Behold the Prime Minister of Canada.
Posted by Owen Gray at 10:00 am

Email ThisBlogThis!Share to TwitterShare to FacebookShare to Pinterest
Labels: The Electro-Motive Strike

Unfortunately, thwap, scum can rise to the top of an unhealthy brew.