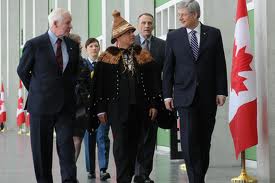 This week's summit between First Nations chiefs and the Prime Minister played out according to Stephen Harper tightly scripted wishes. It was all pictures, good wishes and no substance. Harper works very hard to stage manage his appearances; and this summit was supremely stage managed. There was no mention of the fact that, six years ago, the prime minister tore up the Kelowna Accord.

But, for a government that is on record as not paying attention to statistics, there are a few which should be on every Canadian's mind:


There is rebellion brewing. The government has been warned that an Aboriginal Spring is around the corner.

Years ago, I sat in on a meeting of African American kids from ghettos in the southern United States. It was 1969, a year after Martin Luther King's assassination, and American cities were burning. I was one of a group of white middle class kids who were getting a taste of what life was like for the kids we only saw on television.

One of us said to a young lady who was vocal, but not hostile, "There are 22 million of you and 180 million of the other guys -- and they have more guns than you do."

If people get desperate enough, all hell can break lose. Mr. Harper is sitting on top of a volcano. The pictures from that eruption will not be carefully stage managed.

Hope springs eternal. By that I mean the First Nations leaders who showed up at that monster's summit expecting that maybe, possibly, he would do something for them.

Harper hopes that he can divide the First Nations. It's a time tested strategy for him, thwap.

If enough of Canada's native people's unite, they can make life life very uncomfortable for this prime minister.

It's a lesson the opposition parties need to take to heart.