Would Ike Be A Republican Today? 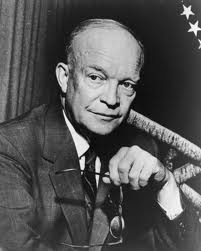 As Mitt Romney and Newt Gingrich tear away at each other -- claiming that each benefited mightily from the government they both claim to despise  -- Lawrence Martin reminds his readers that there used to be a Republican president who consciously sought a middle way:

didn’t become a Republican until 1952, the year he campaigned for the presidency. He had never been schooled on political partisanship. “My only appeal to you,” he said during the campaign, “my only appeal to America … is to place loyalty to the country above loyalty to a political party.” He forbade his staff to issue personal attacks against opponents. He was dismayed by the primal political instincts of his vice-president, Richard Nixon.


In the end, Eisenhower did not have much praise for Nixon. When asked to name an important decision Nixon had participated in, Eisenhower responded, "If you give me a week I might think of one." Given what happened during Nixon's presidency, historians may one day write that Eisenhower's greatest contribution to his country was keeping Nixon away from the levers of power.

But, most importantly, Ike understood the limits of military power. He kept U.S. troops out of Suez and Vietnam. And he warned his fellow citizens of the dangers of the military-industrial complex. The man who led the D-Day invasion told Americans:

Every gun that is made, every warship launched, every rocket fired signifies, in the final sense, a theft from those who hunger and are not fed, those who are cold and not clothed. This world in arms is not spending money alone. It is spending the sweat of its laborers, the genius of its scientists, the hopes of its children. This is not a way of life at all in any true sense. Under the cloud of threatening war, it is humanity hanging from a cross of iron.


Republicans have come a long way since Ike's day.  One doubts that he would recognize his party, let alone vote for it. He'd probably call himself an independent -- which is what he was before he became president.

This entry is cross posted at The Moderate Voice.
Posted by Owen Gray at 9:29 am

David Gergen worked for Richard Nixon. Gergen has repeatedly said that Nixon wouldn't stand a chance of getting the Republican nomination today. He'd be viewed as a socialist. Bill Moyers said much the same of Barry Goldwater on Bill Maher's show Friday night.

The radical fringe element has seized control of the Republican party just as our own version of that has ascended to lead the Conservatives. There are some interesting parallels. Both are corporatist, secretive, and very authoritarian. Both steadfastly reject science. Both manipulate their supporters with a cocktail of fear and hate. Harper and Gingrich would be very comfortable sitting down to breakfast together.

I read (in the Globe)that Gingrich praised Stephen Harper for being both Conservative and pro-American.

Bob Rae's reaction seemed appropriate. "They deserve each other," he said.