The Myth Of The Reluctant Politician 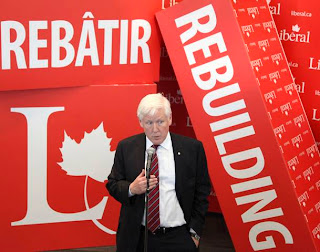 We all yearn for a modern day Cincinatus, who -- so the story goes -- left his quiet life on the farm to serve Rome. In truth, Cincinatus was a Roman aristocrat who, because of political reverses, had been exiled there until circumstances allowed him to return.

Lawrence Martin argues that political parties are at their best in the hands of career politicians, be they John A. Macdonald, Wilfred Laurier, Mackenzie King or Stephen Harper. It is for that reason, he writes in this morning's Globe and Mail, that the Liberal Party is in good hands:

What Liberals are encouraged about is not new policy but the fact that the party is now in the hands of a seasoned political pro, one who has demonstrated a surefootedness that has been absent under the three previous leaders.


There are those who will strenuously disagree with Martin. Many of them are card carrying Liberals. But, for the present, it's hard to argue with Martin's assertion that:

For Liberals, the experience and professionalism Mr. Rae brings are what is needed at this time. With an election four years away, policy can wait. The one big issue he emphasized in his closing convention speech was income inequality. He sees this as a good prong with which to attack the Conservatives’ economic record.


The Conservatives assume that income inequality is a natural state of affairs.They do not see that it is their Achilles Heel. If Mr. Rae's political acumen can clear the way for a clear shot at such an obvious political weakness, the Liberals have a future.

Several commentators have opined that this weekend was a blast from the past. We shall see. Martin writes that:

The message from Bob Rae was that the Grits are and will remain the non-ideological party, the party of the pragmatic centre where reason allegedly triumphs over gut prejudices of the left or right.


If the new prime directive in Canadian politics is that gut prejudice trumps reason, then we are, indeed, in deep trouble. Those who operate on that principle should be exiled to their farms.

I'm so glad the Globe has finally caught up with my thinking on this issue. ;)

The best news for the Liberals is that they are in the national news, which hasn't really been the case for some time. Signals something?

The national press hasn't had much good to say about the Liberals, Chris. Peter C Newman thinks they're dead.

But those who see doom for the party are a little early out of the gate. They have a long way to go. But with only thirty-five seats, they are being more effective than their numbers indicate.

To the contrary. My sense (as someone who doesn't read or watch corporate news) is that there's been more reporting of Liberals picking their noses than there's been of the race to be the leader of the official opposition.

The Liberals can advertise themselves as non-ideological centrists intent on reducing social inequality, but their record betrays them.

They are neo-liberals who have contributed mightily to neo-liberalism. Unless they're Bob Rae, who espouse social democracy until somebody with power complains about it.

I agree that the Chretien- Martin years were a trip into right wing territory, thwap.

And, at the time, Rae found himself doing battle with what he used to call "The Red Army Chorus."

It's one of history's ironies that he now leads Jean Chretien's party with Chretien's support.

It will be interesting to see who the NDP chooses as a leader. That choice will have a lot to do with the Liberals -- and Rae's -- future.

I've read "Giving Away A Miracle," "Rae Days" "From Protest to Power" and I don't recall hearing that.

When did he say that?

He likes to pretend that not caving in to the Glib and Stale's editorial board is communism! Hah! And mild criticism of Israeli Apartheid is anti-Semitism.

Rae was heavily critical of the Liberals back in those days, thwap. Remember, Paul Martin was cutting transfers to provinces, and Ontario was in recession.

When insurers threatened to leave Ontario -- and take jobs with them -- if auto insurance went public, Rae changed his mind and was accused of being a traitor to his principles. Rae said he would rather protect those jobs.

So he was caught in the middle. The left called him a traitor; and the right called him financially irresponsible. He was toast in the next election.