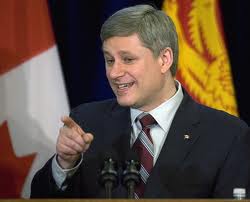 Susan Riley wrote in the Ottawa Citizen yesterday that  federal politics these days is truly baffling:

It is hard to decide what is more astonishing: Prime Minister Stephen Harper's inconsistencies and course corrections, or the fact they have done no serious damage to his standing in the polls.


For a man who claims to offer no surprises, Stephen Harper has been remarkably inconsistent:

He accused critics of wanting to "cut and run" in Afghanistan, but, after nearly a decade of futile struggle, conceded the war was unwinnable and began withdrawing Canadian forces. He was never going to downplay China's human rights abuses in the name of the "almighty dollar" - until it became useful, recently, to ardently court China as a customer for tarsands oil.

There were other surprises: Mulroney-style Senate appointments, the unsavoury Chuck Cadman affair, the creative use of G8 funding to help Tony Clement secure re-election, the inexcusable defence of an EI watchdog agency that has done no work, has no immediate work to do, yet has already cost the treasury $3.3 million, with no end in sight.

In the end, Riley wrote, Stephen Harper's lack of charisma has put many Canadians to sleep, while others have simply given up:

They turn their back on politics, don't bother to vote, even imagine it is fashionable to remain aloof.

They claim all politicians are the same, but they aren't. They claim it doesn't matter which party holds power, but it does.

If Occupiers had simply voted en masse in May, we wouldn't have a majority Conservative government today.

Stephen Harper is firmly ensconced in Ottawa and now lectures Canadians  and Europeans on how they should run their economies -- even though the decisions which benefited Canada were made by others.

And he does so, even though a clear majority of Canadians didn't vote for him. As long as that majority remains divided, they will make it easy for Stephen Harper to succeed.

Owen, the best thing Harper has going for him is the pathetic state of the Opposition.

For years Harper has assured Canadians at every opportunity that he has no 'secret agenda.' Then he flies to Switzerland to unveil to the High & Mighty his plans for 'major transformations' at home starting with pensions.

Harper has plainly shown his secret agenda just as he's shown he won't be consulting Canadians about it.

And where exactly is the Opposition? The NDP make my skin crawl and the Libs are no better.

Harper won't make these announcements at home, Mound, because he would have to face opposition.

He won't introduce budgets in the House, because he would face opposition.

Until the opposition parties make a point of being in Harper's face, they will not get anywhere.

That might mean shadowing him wherever he goes, and responding to his announcements immediately after they are made -- in the same place that they are made.

Every government has that moment when the tide turns and everything seems to change. At the time the moment seems fairly insignificant or like a bump on the road. For the John Major government in England for example, the moment came early in the mandate when Chancellor Lamont took Britain out of the EU exchange rate mechanism, something he said he would never do and which he spent hundreds of millions trying to prevent. There were still nearly four years left for the Major government but when people looked back many commentators agreed that this was the seminal moment that broke the government's back.

Big things happen this way, something gives and everything seems to change. My father used to talk about a certain week in 1969 when the mood in the US economy seemed to change and the director of the company he worked for gave a big talk to the staff saying that all of the corporate bigwigs he knew were suddenly saying that everything in the US market suddenly felt different. It was right around that time that many people say that the long post-war boom ended.

I actually suspect we saw that moment for the Harper regime this week. The mood suddenly changed, I felt it happen and it was weird. The left side of my brain tells me that yes, this was a big moment. The beginning of the end for Mulroney was when he went after the Seniors. He never recovered from that. And this is what Harper has done, he has pushed a knife into the back of a generation and it is a bad idea. But there is something more than that. Something about the mood suddenly changed. I can't explain exactly what happened but there was a sudden shift in how people are seeing things. It is a combination of the economy, feelings of discontent, fear, the realization that this is a majority government that can no longer blame others for everything, and just feelings of boredom with the prevailing situation.

Watch what happens over the next couple of years, things are going to change now, and when people look back the change happened this very week. There is nothing particularly new in the evil of this government that anyone can point to but I can feel something has changed. I don't know what will happen now but it won't be the status quo.

I truly hope you're right about this week being the tipping point, Kirby.

Certainly the Harper government would never see it coming. Stephen Harper likes to tell the world how superior Canada -- and he -- are to the other less than blessed inhabitants of the planet.

It's truly time for the wheel to turn.

I'd sure like to think Kirby was right and I'd have a lot more confidence in it if only we had a viable Opposition to skewer Harper. The NDP couldn't find their adversarial ass with both hands and a mirror and the Libs, well we'd best let that one be for a while. Purging the LPC of the centre right mantle it adopted under Iggy isn't going to be easy but until real progressivism is reinstated the LPC won't connect with the voting public.

A lot will depend on who the NDP chooses as its leader, Mound.

As for the Liberals, I agree that the LPC did itself no favours when they chose Iggy.

The Conservatives may stumble. But nothing is going to happen if the opposition doesn't make something of it.