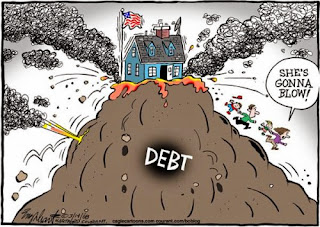 No doubt the folks at the Heritage Foundation will pillory Paul Krugman for his column in this morning's New York Times. Their disrespect for him matches his own disrespect for them. On the subject of the national debt, Krugman writes:

Perhaps most obviously, the economic “experts” on whom much of Congress relies have been repeatedly, utterly wrong about the short-run effects of budget deficits. People who get their economic analysis from the likes of the Heritage Foundation have been waiting ever since President Obama took office for budget deficits to send interest rates soaring. Any day now!

And while they’ve been waiting, those rates have dropped to historical lows. You might think that this would make politicians question their choice of experts — that is, you might think that if you didn’t know anything about our postmodern, fact-free politics.


The problem, Krugman claims, is that right wing ideologues have chosen the wrong analogy. They claim that the U.S. government is like a family who has taken out too big a mortgage. But that's simply not the case, for two reasons:

First, families have to pay back their debt. Governments don’t — all they need to do is ensure that debt grows more slowly than their tax base. The debt from World War II was never repaid; it just became increasingly irrelevant as the U.S. economy grew, and with it the income subject to taxation.

Second — and this is the point almost nobody seems to get — an over-borrowed family owes money to someone else; U.S. debt is, to a large extent, money we owe to ourselves.


Of course, Krugman's critics will say that's absurd. America is on the hook to China. But, according to Krugman:

It’s true that foreigners now hold large claims on the United States, including a fair amount of government debt. But every dollar’s worth of foreign claims on America is matched by 89 cents’ worth of U.S. claims on foreigners. And because foreigners tend to put their U.S. investments into safe, low-yield assets, America actually earns more from its assets abroad than it pays to foreign investors. If your image is of a nation that’s already deep in hock to the Chinese, you’ve been misinformed. Nor are we heading rapidly in that direction.


Krugman repeats the argument he has been making for a long time. Politicians should be  focusing on unemployment. When people go to work, tax revenues go up -- and deficits go down. But that won't happen until those in charge get their analogies right.


This entry is cross posted at The Moderate Voice.
Posted by Owen Gray at 8:07 am

Email ThisBlogThis!Share to TwitterShare to FacebookShare to Pinterest
Labels: Krugman on Debt