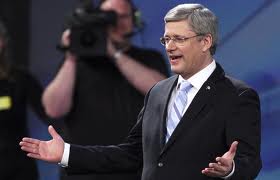 Tom Walkom has a way of pricking the hot air balloons which the Harper Conservatives keep trying to launch. In today's Toronto Star, he writes that Canada's current international swagger is firmly rooted in hot air:

It depends on one commodity and one country. The commodity is oil; the country is China.

Right now both are going gangbusters. The Chinese economy surges along. That surge keeps the price of oil at its current, near-stratospheric, level. This, in turn, makes oil producers rich and keeps the rest of the Canadian economy above water.


Recent history should remind us all that what goes up can fall quickly to earth. The simple truth that what soars into the stratosphere -- like so much space junk -- eventually crashes.

The National Energy Board estimates that the price of crude oil, now roughly $100 a barrel, will have to stay in at least the $90 range if new tar sands projects are to be profitable. Yet no one worries.

The reigning assumption seems to be that the price of oil will never, ever, significantly go down again — that there will be no new technological advances that might allow existing reserves to be exploited more efficiently.

Given history, it is a heroic assumption.


As for China's roaring economy, Canada needs only cast an eye towards its closest neighbour to take a cautionary lesson. Japan, too, provides all high flying countries with  a warning:

Who can forget the Japanese miracle? It was the way of the future. Just as Harper today makes pilgrimages to China, former prime minister Brian Mulroney voyaged to Tokyo to see the new wonders and sell Canadian energy.

Yet the miracle eventually ended. The Japanese economy crashed in the 1990s and has never fully bounced back. No one talks about quality circles any more.


Yet the Harper Conservatives continue to strut about the world stage, blowing hot air -- no lessons learned.
Posted by Owen Gray at 9:32 am

China has entire "ghost cities" built by speculators with almost no inhabitants.

China has all kinds of bugs which will make the government itch. They should be careful what they wish for, thwap.